The Court of Appeal upheld the verdict to blogger Mehman Huseynov 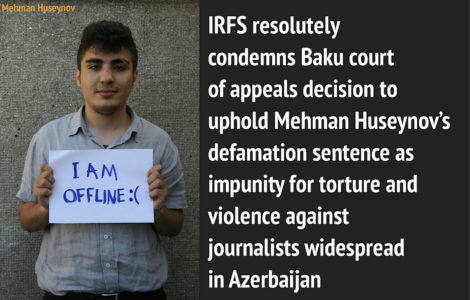 The Baku Court of Appeal (BAC) today again upheld the verdict to blogger Mehman Huseynov. The reason for the arrest of the blogger were his allegations of torture in the police in January this year. In response, the head of the Nasimi police department Musa Musayev filed a libel suit. On 3 May the Surakhani District Court sentenced Huseynov to two years in prison, finding him guilty of libel ( Article 147 of the Criminal Code.)

On 29 September the Supreme Court partially granted the appeal of Huseynov, returning his complaint to the Court of Appeal.
Today at the beginning of the meeting, lawyer Fuad Agayev said that Mehman Huseynov was being persecuted because of his blogging and journalistic work and he did not commit a criminal offense. The lawyer called the criminal case absurd from the point of view of the law, as a libel and insult can be sued by a physical, rather than a legal entity. In this case, Musayev filed a lawsuit on behalf of the police.
By law, he himself had to appear in court, but did not do it.
The Baku Court of Appeal did not actually execute the decision of the Supreme Court to conduct a judicial investigation. To do this, the records from the CCTV cameras in the Nasimi police, where Huseynov was kept, should have been investigated. But the police did not introduce them.
Another lawyer, Fahraddin Mehdiyev, pointed out that Mehman Huseynov was arrested after publishing a series of video reports about expensive real estate of high-ranking officials and deputies. Mehman Huseynov himself said that he was being persecuted because of the stories about corruption, which he published on the page of Sancaq Production and Facebook.
He also noted that he was a member of the Institute for Reporters’ Freedom and Safety and was elected its chairman not long before his arrest.
“The first chairman of the ISBR Emin Huseynov was forced to leave the country. The second chairman, Rasim Aliyev, was killed. Me – the third chairman was arrested,” said the accused and asked for excuses.
“I’m asking for an excuse and cash compensation for every day in prison. I will certainly share with you,” Huseynov said, referring to the judge, which caused laughter in the hall.
Judge Aflatun Gasimov removed several people after that and threatened to arrest next time those who laugh. The representative of the private prosecutor, Alirza Abilov, spoke in favor of keeping the verdict in force and stated that the representatives of the defense are making political statements.
In the end, the judge upheld the verdict.
Lawyers of Huseynov said that they will file a cassation appeal against the verdict to the Supreme Court.
TURAN NEWS AGENCY

Director of “Channel 13” sentenced to 6 years