The trial of Giyas Ibrahimov 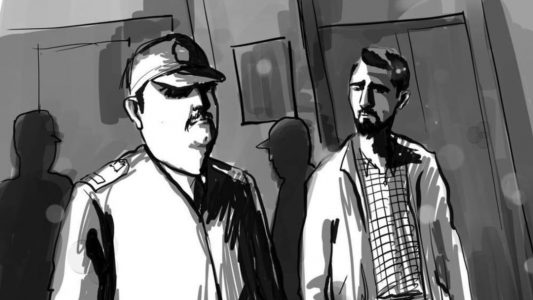 At the Baku Court of Appeal, under the chairmanship of Vugar Mammadov, a meeting was held on the appeal of NIDA member Giyas Ibrahimov. At the end of last year, the Baku Serious Crimes Court sentenced Ibragimov to 10 years in prison on charges of illegal possession of drugs for sale. The process was attended by representatives of the European Union and the local community. Gyas Ibrahimov was brought into the hall and placed in a glass dock. Immediately afterwards, the judge entered the hall, declaring the process open. The judge gave the floor to lawyer Elchin Sadigov. He asked the court to send a letter to the leadership of the Baku detention centre with a request to ensure admission of doctors to the isolation ward, which will examine my client because of impaired vision. “Giyas can not prepare for court because of pain in his eyes. When Giyas appealed to the prison director’s office he was told to apply to the court, which agreed to invite a doctor. Still Giyas hasn’t been treated.” The prosecutor objected, saying that in the Penitentiary Service there were excellent doctors. The court, conferring on the spot, said that any defendant has the right to invite a doctor and this should be handled by the prison’s management. After that, Elchin Sadigov said: “At the trial, Giyas Ibrahimov stated that on May 9, 2016, at approximately 11:00 pm he along with Bayram Mammadov wrote political slogans on the pedestal to ex-president Heydar Aliyev and the next day upon leaving a test at the Slavic University He was kidnapped by civilians and taken to the police. He was tortured and accused of acquiring drugs for sale. The decision of the Baku Court for Grave Crimes was written off from the indictment, the verdict of witness Shura Amiraslanova was not even reflected in the verdict. The sentence can not be considered lawful. In the lower court, I filed a petition to check the fingerprints on the seized drugs and petitioned to take fingerprints from the employees of the Narcotics Office of Gorotdela. If my petition were granted, it would be obvious that the drugs were planted. I am applying for an expert examination. In the case of Laidjova v. Azerbaijan, the European Court of Human Rights recognised his innocence, based on the fact that the police check-up was conducted half an hour after he was brought there. During this time, according to the European Court, the police could have planted drugs. In the course of the investigation, an expert on the definition of narcotic substances was appointed by investigator Shirali Babayev, who was not related to the case. I ask you to interrogate Babaev again. With regard to Giyas Ibrahimov, the inspection protocol was drawn up at 23:30, that is, 8 hours after his detention. The search in the apartment of Giyas Ibrahimov was carried out illegally since a court decision or consent of all persons residing in the apartment is necessary for the search. The authorities had neither a court decision nor the permission of the residence and the investigation justified the search with the confession of Giyas. In addition, Giyas was in fact deprived of the right to defence. The ombudsman Ogtay Aliyev, who was granted to him, took part in the criminal case for 10 days as a lawyer. This gives grounds for doubting his cooperation with the investigative authorities. Just in May, he was a lawyer in 49 of the 51 lawsuits involving state-appointed lawyers. I ask you to send an inquiry to law firm # 5, to provide a list of all the cases that Aliyev conducted in May 2016. Also, investigating the origin of the warrant issued to Oktay Aliyev in this case, I noticed that the name of Giyas Ibrahimov was written over another name, covered up with white out. This proves that the warrant was issued in the name of another person, and at this time the lawyer was interrogated in another criminal case. I ask you to ensure the delivery of the original order in the court order. In addition, I ask you to provide records from the surveillance cameras of Narimanov’s temporary detention facility, which will help prove torture. Police officers, testifying in court, said that they received operational information about Ibragimov. I ask the court to provide books of registration of operational information for that period. In addition, I ask the court to give me time to prepare the speech. ” The state prosecutor opposed all the petitions, and the court, having conferred on the spot, rejected them. Then the floor was presented to Giyas Ibrahimov: “I ask the court to give me time, because I can not prepare for the trial, read. I will be able to speak only after passing the examination and treatment. 3-4 months, I applied for medical help to the prison director’s office, and the doctor who came after that appointed me the wrong treatment. Send a letter to the Baku detention centre so that they will provide my treatment, only after that I will be able to participate in the process, “he said. The court, having conferred, granted Ibrahimov’s request. However, the court refused to provide a letter to the detention centre. The next process is scheduled for May 31.
Previous Post