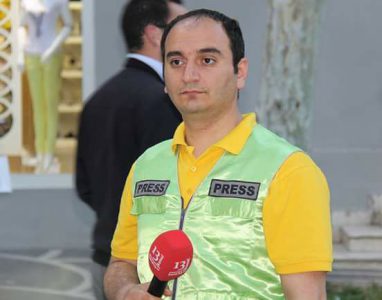 The journalist’s lawyers filed several motions at the hearing. Javad Javadov asked the court to apply to the Constitutional Court for the interpretation of Article 192.1 of the Criminal Code.

Javadov further requested that the court arrange a video conference to enable accused journalist’s brother Anar Orujov to testify. “The investigative agency refers to Aziz Orujov as the actual head of the Caucasus Media Research Centre without brining any evidence and has charged him for the grants received by the organisation in question. In fact, it is his brother Anar Orujov who heads the organisation,” the lawyer said.

Lawyer Alibala Rzayev filed a motion for the courtroom questioning of the inspection act signatories and the expert witness.

“The prosecutor’s office alleges that a grant agreement is not considered a grant unless it has been registered, and labels the operations conducted under such grant funds as illegal business, but it does not support its claims with anything and does not refer to any law. The expert has just copied the inspection act into its opinion and signed it. Therefore, it is important to question these people” the lawyer noted.

The court did not grant the motions.
The judicial proceedings will continue on 5 December with a speech by the prosecutor.

Background: On 1 June, the Serious Crimes Investigation Department of the Prosecutor General’s Office launched a criminal case against Aziz Orujov. He was charged under Articles 192 (illegal business) and 308 (abuse of official powers) of the Criminal Code. On the same day, Nasimi District Court ordered that Orujov be put in pre-trial detention for 4 months.
Aziz Orujov rejects the charges.