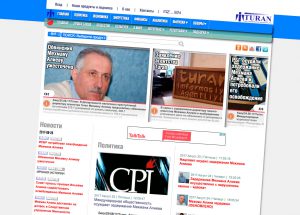 Baku City Local Revenues Department of the Ministry of Taxes has restored the tax sanction against Turan Information Agency for the period of 2014-2016.
On 18 September, Turan Information Agency received three emails dated 15 September from the Ministry of Taxes. The emails read that the Agency owes 27,253 AZN in unpaid taxes and 9,294 AZN in arrears.

Note that, on 12 September, Turan received 3 letters dated 11 September from the above Department. According to those letters, the Agency does not have any tax debt or penalty.
The Agency’s bank accounts were unfrozen after the tax sanctions had been lifted. Now that the sanctions have been reinstated, Turan’s accounts can be expected to be frozen once again.

Background: In May, the Local Revenues Department levied a 4,000-AZN sanction against Turan Agency for 2016. However, after Turan’s administrative appeal, the Ministry of Taxes annulled this decision on late June. On 7 August, the Department imposed 9,000 AZN in taxes for 2016 and 37,000 AZN for 2014-2016, and launched a criminal case.
On 25 August, Agency’s director Mehman Aliyev was arrested. However, on 11 September, his pre-trial detention measure was replaced and he was released.