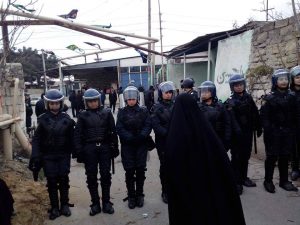 Nardaran settlement resident Fail Shahbazov, who was sentenced to 30-day administrative imprisonment on 23 November on charges of disobedience to lawful demands of a police officer (Article 535 of the Administrative Violations Code), is alleged to have buried a ‘sawed-off’ hunting rifle with an obliterated serial number and an F-1 grenade in the area of the settlement. The information was disseminated by the Ministry of Internal Affairs on 17 December.

According to the Ministry’s statement, the buried weapons were found and seized during an operation conducted by the officers from the Criminal Investigation Department of Baku City Main Police Department and the 42nd police station of Sabunchu District Police Department.

At the time of Fail Shahbazov’s detention, lawyer Yalchin Imanov said Shahbazov had frequently attended the hearings on the ‘Nardaran case’, and he regarded Shahbazov’s arrest as a reprisal for his frequent attendance at hearings.