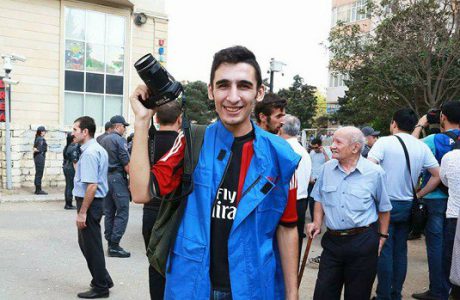 This afternoon, journalist Eltaj Turan Turk faced pressure by the police while filming the forced eviction of internally displaced people from the building where they lived.

“The police officers were ordering the employees of a cargo taxi from the 166 taxi service to move the furniture and belongs from the apartment onto the truck. The apartment owner was apparently opposed to this. There were high-ranking officials and policemen around on the scene. They were worried by me filming the events. A police sergeant immediately came up to me and asked in a rude manner why I was filming. In response, I said I was a journalist and the Constitution allowed me to do so. The policeman went away. Then, a police captain forced me into a Mercedes vehicle. I was subjected to various kinds of insult and slapping. I was brought to the police office #7. There, they deleted all data from my photo camera. I found an opportunity to inform two of my friends before they took away my phone and switched it off. Three hours later my friends and lawyer arrived. What I have written here I also noted in my statement,” the journalist added. He intends to appeal to court.