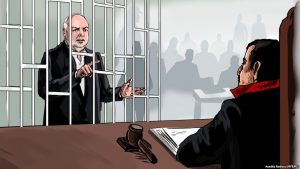 According to the lawyer, the court first heard testimonies on the episode of REAL HCC (Housing Construction Cooperative) Chairman Ilham Gasimov and Namig Orujov. “Namig Orujov’s ex-driver Gulaga Guliyev, who has been recognised as a victim by the investigative agency, testified at the hearing. He did not confirm his investigation statement. In his statement to the court, he noted that he drove Namig Orujov to the wedding of Ilham Gasimov’s nephew in 2015, where a quarrel broke out and he was detained, but was later found out to be innocent and was released. Guliyev denied the allegation about masked men entering the restaurant,” the lawyer noted.

Nasibov added that former diamond seller Elchin Hajiyev had testified at the hearing as a victim and confirmed his investigation statement, but they had spotted inconsistencies in his testimony. According to the lawyer, the victim had changed his testimony five times in the course of the hearing. “We asked him questions and he got confused. It even turned out that he had not presented a declaration at customs regarding the import of diamonds. This person was found out to have illegally brought diamonds into the country. He was directly engaged in smuggling,” the lawyer said.

Elchin Hajiyev testified that he brought a 14-karat diamond gem from Turkey in February 2013 and wanted to sell it. “In summer of 2013, my friend Tofig Rajabov phoned me and said some people, whom he did not know, wanted to buy it. Together with him and my cousin Ajdar Hajiyev, I went to the area around the Nizami Cinema to sell the jewellery. Immediately after meeting with the two persons who allegedly wanted to buy the diamond, we were surrounded by approximately fifteen men. They took all three of us to the MNS against our will. The employees of the department headed by Akif Chovdarov took the diamond from me and told me that they would keep it as material evidence. They demanded USD 150,000 in return for our release. An employee, who introduced himself as Rashad, and deputy head of the third department Akif Aliyev started to bargain. Finally, we agreed to pay USD 80,000 to be freed. I left the MNS to bring the money. They kept my cousin Ajdar Hajiyev and friend Tofig Rajabov as ‘surety’. I sold my car at a cheaper price, borrowed money from friends and acquaintances, and got together USD 80,000. I gave that money to Akif Aliyev, and they freed my friend and relative held as ‘surety’ and gave the diamond back,” Hajiyev said.

Ajdar Hajiyev was next questioned as a victim at the hearing. He confirmed his investigation statement. He testified that they were approached by two people on the incident day. “One of them was slightly stout and the other was a bit thinner. The stouter one was relatively older, I’d say, about 60-65. Elchin showed them the diamond and its documents. After checking the diamond and documents, the two said they would purchase it the next day. Elchin put the gem into his pocket and the two persons went away. They had just gone that 10-15 people suddenly approached us. One of them introduced himself as an MNS employee and said they were going to take us to the MNS. Without giving us an opportunity to speak, they brought all three of us to the MNS. As soon as we got into the car, the one behind the wheel said ‘give that thing to me’. I could not understand what he meant. He said ‘the thing that you sell’. I said ‘I do not sell anything, honestly’. We arrived at the MNS. They seated me, Elchin and Tofig on a sofa in the corridor. We understood that the reason we had come to the MNS was Elchin’s diamond. They took Elchin to another room. They seated me and Tofig in separate places in the corridor. While in the corridor, the MNS employees next to us were saying ‘do you understand what you have done? Are you engaged in contraband?’ They interrogated Elchin for about one hour. They released him at around 3 pm.

Elchin’s face was red when he left the interrogation room. It was obvious that he was not okay, he was distressed. Then they took me into another room and put me in front of the camera to film. They asked whether I knew Elchin. I said I was Elchin’s cousin. I was shocked by the situation I was in because I had never faced such a situation or pressures. When Elchin left, we understood that they released him to bring money. At around 9 pm, a shortish man released me and Tofig and said that we were free and could go,” Hajiyev said.

Eight employees of the dissolved Ministry of National Security also testified at the hearing. They also confirmed their investigation statements.

The proceedings will continue on 17 April.

It should also be noted that MNS General Akif Chovdarov has filed a lawsuit against the Ministry of Labour and Social Protection of Population. In his lawsuit, he sought to be sent a fact sheet from the Department for Work with Military Personnel and Persons with Special Ranks of the State Social Protection Fund to the Ministry and to be granted pension. The case was considered by Baku Administrative Economic Court #1 and the proceedings in the case were suspended.

Chovdarov has appealed this decision to the higher court. The appeal will be heard under the chairmanship of Judge Mirza Tagizade of Baku Court of Appeal on 5 April.