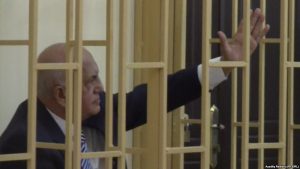 > The public prosecutor read out the indictment bill;

> Ali Insanov testified: I am in opposition to the government, not to the statehood;

> Inmates Rovshan Salahov and Shunasib Aliyev and ex-inmate Anar Tahmazov, who are attesting witnesses in the case, and employee of the Penitentiary Service of the Ministry of Justice Fuzuli Ismayilov testified as a witness and confirmed what was written in the indictment bill.

Due to the fact that journalists had been barred from the previous hearing, before the start of today’s hearing Ali Insanov demanded that journalists’ presence be ensured, otherwise threatening to file an objection against the jury. A small number of journalists were allowed into the courtroom, half of which had been filled with furniture. The only nine available seats were taken by four journalists, one victim and court bailiffs, and the prison escorts who had accompanied the defendant. A large number of journalists and members of the public were denied access to the courtroom.

Commenting on the accusations, Ali Insanov pleaded not guilty.

Insanov gave the following testimony. “I am dissatisfied with the way the trial is conducted. I am held in a barrack together with 150 people. The charges brought against me are fabricated; they are all lies and slander. At the previous hearing, I and my lawyers filed three motions. The lawyer could not even finish his words when you said ‘Shall not be granted’. I petitioned that the measure of pre-trial detention ordered in respect of me be replaced with house arrest. There is a presidential decree in this regard. Nothing would have changed if I had gone and stayed at home for fifteen days. This goes to show that you ignore the president’s decree, the same way you ignore the laws. You should know that Ali Insanov is in opposition to the authorities, not to the statehood. A state is not doomed without a ruler, but it is doomed without laws. The attitude towards me is obvious. They keep my family members in the country like hostages and do not let any of them work. They have banned my medications from sale in the country, do not let my books through customs, and have frozen my honoraria in an amount of half a million. I am one of the persons who has built this state. The charges against me are so absurd. I have done so much for this state. Now they say I have become a drug addict at the age of 70, really? What do you want to prove to Europe? That the state is governed by drug addicts? If I am a drug addict, you should check those who rule the state, go investigate officials themselves, maybe there is another drug addict left.

The room, where the medications were, is not mine. All inmates stored their items there. That day, I was with my lawyer. They waited till the lawyer went, and then grabbed my arm and took me to the prison chief. How is it that they come from the headquarters and find narcotics, but no one is punished in the prison facility? Anar Mammadov, who is passed off as a victim, is the son of my friend Gulmammad. Gulmammad is a former deputy chief of the Penitentiary Service and we are like brothers. When I found out that Anar is his son, I could not believe my eyes. Everyone chooses their own path. You reap what you sow, anyway. I have paid half a million to the state in taxes. Now I do not have a penny left in my pocket.

They filtered the medications sent to me. My medications were with me and everyone saw what medications I used. When they called me and said they had found [narcotic] substance, I said ‘it is clear’,

because I was expecting it. I said nothing else. How could I hit a person stronger than me in the presence of fifteen employees? Am I Bruce Lee or Muhammad Ali? I did not say a single bitter word there. I knew they had been instructed to do so. Two of the inmates, who are attesting witnesses, are at liberty. This was a put up job. But you should know one thing: Ali Insanov will neither be broken nor submit. The struggle goes on. I have received a message that they are plotting an assassination. You should keep in mind that Ali Insanov lives for struggle, not for protecting his life,” Insanov said.

Next, Penitentiary Service employee Anar Mammadov, who has been recognised as a victim, testified at the hearing. “I and another employee of the Penitentiary Service went to carry out the inspection in Prison #13 in accordance with the quarterly schedule. That day, we conducted the inspection in the prison facility at 12 pm. The fact that the door of one of the rooms in the inmates’ dormitory was locked caught our eye. They said the room belonged to inmate Anar Tahmazov. We called Anar Tahmazov and had the door opened. He told us that his and Ali Insanov’s items were kept in that room. We looked around the room; there were a blanket and a bag. Tahmazov said the bag belonged to Ali Insanov. We lifted the blanket and found medications underneath. There was also a fridge in the room, inside which we found medications, as well. We asked for Ali Insanov to come. They said he was in a meeting with his lawyers. We wanted the lawyers to come, too. But the lawyers had already gone. We invited Ali Insanov to the room. We asked him to introduce himself, but he refused and told us that he used to a minister once and we were supposed to recognise him. When we asked him about the medications, he said ‘the medications are your friends’, not mine’. When I was drawing up a protocol, Ali Insanov tore the protocol, collared and shook me, and I hit my head on the door and fell down. I saw my shoulder strap was also torn. After that, the prison chief ordered that Ali Insanov be taken to the punishment cell. I lost consciousness and felt bad. They called an ambulance. The first aid team examined me. My blood pressure had risen. I did not go to the hospital that day. But the day after, I went to the Treatment Facility of the Penitentiary Service, where I remained for 30 days as an inpatient,” Mammadov said.

Ali Insanov said he was in a meeting with his lawyers from 2 pm to 4 pm, whereas the Penitentiary Service employees inspected the room at 12 pm. “I was in the library at that time. Had they wanted, they would have called me and I would have participated in the inspection. Why did they not examine the glass container to see whether I had fingerprints on it or not? They say the medications found there were colourful. But they cannot fool me because I am a doctor myself. Colourful medications like that are multivitamins. Psychotropic substances, on the other hand, are white. Anar Mammadov says his blood pressure was up. But I am a doctor and I know that in such circumstances blood pressure drops not rises,” Insanov remarked. He then turned towards Anar Mammadov and said ‘You had come from the Penitentiary Service. Why did you not admonish the prison leadership by saying ‘why do you allow Ali Insanov, our enemy who has attempted to overthrow the state, to store his items in a separate room’? Rather than punish someone in the prison due to the narcotic substance found there, they gave them all promotions. Everyone, who has framed me so far, has been promoted,” Insanov noted.

After that, Anar Tahmazov, an ex-inmate released under the president’s pardon decree, testified. He confirmed Anar Mammadov’s statement. He also noted that during the inspection of the room, Ali Insanov said ‘I am a minister. You have to know me’. “It is a lie. Even when I was a minister, I did not let anyone call me mister minister. Everything they say is a lie,” Ali Insanov reacted. Anar Tahmazov said he had cooked food for Ali Insanov and had been paid AZN 30 a month for his service. Ali Insanov confirmed it. He added that he had given a portion of the food to Anar Tahmazov and said: “Let them be your fair share.” “Be honest, who put those medications there,” Insanov asked Tahmazov next. Tahmazov said he had not seen who had put the medications.

Next, attesting witnesses, inmates Rovshan Salahov and Shunasib Aliyev, and deputy chief of the Operational Control Regime Department of the Penitentiary Service of the Ministry of Justice Fuzuli Ismayilov testified as a witness. Their testimonies exactly matched those of Anar Mammadov and Anar Tahmazov.

Background: Jailed since 2005, former health minister Ali Insanov faced new criminal charges in October 2016, which came just 58 days shy of the expiry of his jail term. According to the allegations, the former

the minister has been found in possession of a medication with psychotropic ingredients and has beaten a prison officer.

Ali Insanov was arrested on charges of a coup attempt on 19 October 2005. But later, he stood trial on charges related to economic offences and was sentenced to 11 years in jail. The complaint submitted to the European Court in connection with this case was granted in 2013. The decision took effect on 14 June 2013. The Plenum of the Supreme Court considered the European Human Rights Court’s (EHRC) decision regarding Ali Insanov. According to the Plenum’s decision, the Appeal and Supreme Courts’ decisions on Ali Insanov were revoked, while the decision of the court of the first instance was not changed and Insanov was not released. The case was referred to Baku Court of Appeal for reconsideration, but the court upheld the judgment.

Photo Reporter Ill-Treated by Governor While Performing Her Job