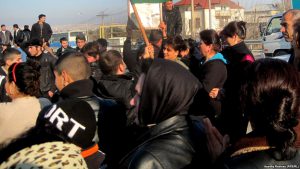 Close to a dozen people were arrested during the December 22nd protest against power cut held by IDPs from Jabrayil region settled in Bilasuvar, detainees Jalal Guliyev’s and Zaur Feyruzlu’s lawyer Elchin Sadigov said on December 28.

According to the lawyer, his clients currently are in Kurdakhani detention centre. “We have not been able to meet so far. But I filed a complaint against the detention of both men on December 27, and it is expected to be considered by Shirvan Appeal Court,” the lawyer noted.

Sadigov added that Guliyev and Feyruzlu are charged under Articles 186.2.2 (destruction of other’s property by arson, explosion or other publicly dangerous way), 233 (breach of public order), and 315.2 (use of violence dangerous to life or health against a representative of authority) of the Criminal Code.

Background: On December 22, a protest rally was held in a settlement of Bilasuvar region populated by IDPs from Jabrayil region. The IDPs attempted to block the Imishli-Bilasuvar highway in protest at frequent power outage. Police forces were deployed in the area. The protesters clashed with the police.