ACTION CONDUCTED AGAINST REFERENDUM IN FRONT OF HOLLAND PARLIAMENT 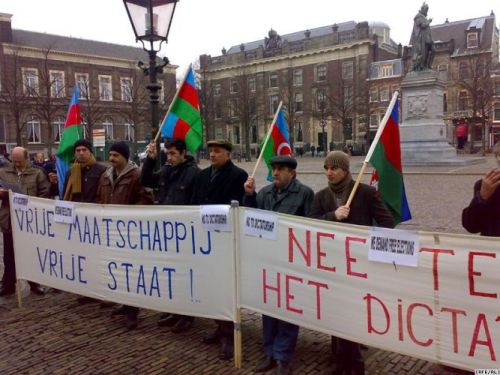 On 4 February, Azerbaijanis living in Holland conducted an action in front of the Parliament building to protest against the referendum that is scheduled to take place on 18 March in Azerbaijan. This was told to “Mediaforum” news site by action participant Eldaniz Yusibov, chairman of World Union of Azerbaijani Political Migrants.
According to Yusibov, during the action has been conducted under slogans “Free society, free government!” and “We say no to dictatorship!” and it was emphasized that the referendum, which considers changes and amendments to the constitution is contradictory to democratic principles.

The leadership of the Dutch Parliament informed the action participants that the next week discussions will be conducted in connection with referendum and the situation of human rights through participation of the Dutch Parliament’s deputies in European Union and Council of Europe and Ministry of Foreign Affairs representatives.
Previous Post

JOURNALIST WHO WAS HARASSED IN NAKHCHIVAN GIVES STATEMENT