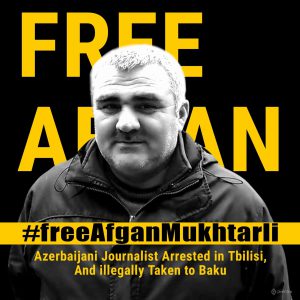 Lawyer Elchin Sadigov has met with Afgan Mukhtarli in Baku Detention Centre. According to Sadigov, the journalist’s health has further deteriorated. “I met with journalist Afgan Mukhtarli who is held in Baku Detention Centre. His previous health problems remain. He told me that he is not allowed to heat his food, while the food provided by the detention centre is inedible. He suffers from strong stomach pains and has lost 16 kilos of bodyweight during his time so far in the centre,” the lawyer said.

Afgan Mukhtarli was brought to Azerbaijan on 29 May 2017 and criminally prosecuted under Articles 318.1, 206.1 and 315.2 of the Criminal Code. He has been given a 3-month term of pre-trial detention under Sabail district court’s decision.