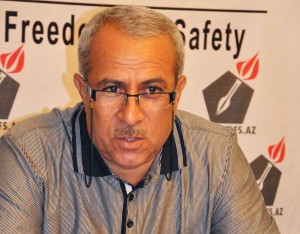 The Institute for Reporters’ Freedom and Safety (IRFS) is very worried about the continuing pressure on its correspondent in Nakhchivan Autonomous Republic (NAR), Hakimeldostu Mehdiyev and his family. As such, healthcare centers in NAR deny surgical operation to the Mehdiyev’s wife, 50, who suffers from severe gynecological disease.

According to Mehdiyev, medical examination for his wife in Sharur (city in NAR)  hospital was deliberately delayed for a month, and finally, operation was scheduled for last Friday. However, on the day of operation the journalist was ‘advised’ to take his wife to the Nakhchivan (capital city) Maternity Hospital on the pretext that there are ‘better conditions’ there.

In Nakhchivan the journalist’s wife was examined again, had her blood tested and the operation was scheduled for February 19, 11am. But then surgeons refused to start operation, saying the journalist had problems with the ‘top’. In other words, they denied medical care to Mehdiyev’s wife because of his journalistic activities.

Mehdiyev noted that his wife is currently in a critical condition, and he seeks to take her abroad for treatment.

Mehdiyev called on international organizations to help save the life of his wife.

Our efforts to get comments from the Nakhchivan Health Ministry on the matter were to no avail.