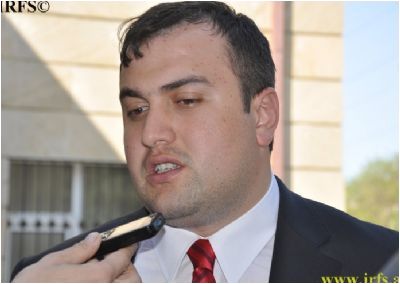 The Institute for Reporters’ Freedom and Safety (IRFS) is deeply concerned over the disciplinary proceedings launched against independent lawyer Elchin Sadigov by the Bar Association. IRFS believes that this is a politically-motivated step by the government to ncapacitate the lawyer, who has been defending journalists, media workers and rights defenders.
IRFS reminds that the authorities have taken similar political measures in the past to restrict  he activities of other lawyers defending journalists, and namely, Khalid Bagirov, Elchin amazov,and Osman Kazimov.

IRFS calls on Bar Association to drop the proceedings launched against Elchin Sadigov.

One of the complaints against Elchin Sadigov was filed with the Bar Association by Ramella Allahverdiyeva, the judge of the Baku Grave Crimes Court.

“Judge Ramella Allahverdiyeva submitted a complaint letter to the Bar Association, for my eaving the July 2, 2012 trial on the case of Avaz Zeynalov without permission. At the July , 2012 trial judge Ramella Allahverdiyeva invited MP Gular Ahmadova to testify, without roviding Avaz Zeynalli and me with copies of the case materials; we objected, saying it is nlawful and that we were not ready for this testimony. My client, Avaz Zeynalov, refused y services and demanded me to leave the courtroom. I asked the jury to allow my client, vaz Zeynalov, to file a written petition of refusal from my services, but the judge said he would decide on my request only after the testimony. When I objected to this step by
the court, the jury ignored my objection. Meanwhile Avaz Zeynalli insisted on my leaving  he court room. Abiding by the code of ethics for the lawyers, I got permission from the ar Association and left the court room at 12:37pm. The trial continued without break for unch, while it is prohibited by the law to work during the rest period” said Elchin Sadigov nd added that the complaint against him was brought by Neftchala Regional Prosecutor’s ffice.

“Neftchala Regional Prosecutor’s Office submitted a letter to the Bar Association, noting hat as my right hand was in plaster, I was proposed to use my left hand sign the protocol n familiarization with criminal case materials, to which I refused saying that I cannot sign ith my left hand so clear. I am defending the rights of Natig Huseynov, who is charged nder Article 315.1 of the Criminal Code following the lawsuit of Neftchala Regional xecutive chief Mr. Ismayil Valiyev. On July 27, 2012 I talked on the phone with investigator nar Mirkishiyev and we appointed our meeting for familiarization with the criminal case aterials for July 30, 2012, 3:00pm in Baku Investigative Prison. However on July 29, 2012 I ell and injured my right arm and I went to the Republican Traumatology Institute on July 30, 2012, at around 10:00am. The diagnostic result was bone bruise and fracture and my right rm (including elbow, wrist and fingers) was put in plaster” said Sadigov, once again noting hat he was not able to sign the protocol due to an objective reason.

Based on the facts provided by lawyer Elchin Sadigov, IRFS considers that the disciplinary  proceedings launched against the lawyer are politically-motivated and demands the Bar ssociation to drop the proceedings. Otherwise, the disciplinary proceedings and their ossible consequences will be deemed as intent to develop coward and biased lawyers in he country.

MOTHER BELIEVES HER SON IS A FRAUD VICTIM