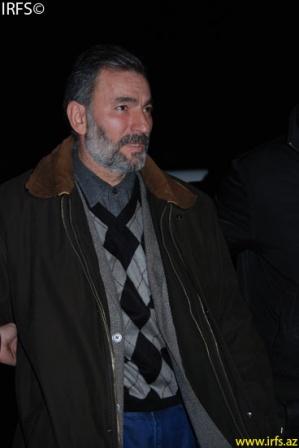 Today Nasimi District Court held a trial on the case of Azerbaijan National Statehood Party and his friend Jeyhun Farzullayev.
The process started with Panahli’s final speech. He said that he was arrested under false charge for his political fight, and therefore he did not express hope for justice Judge Elman Ahmadov then announced the court trial over and said that the sentence will be announecd on June 17, 2011.
Nemat Panahli, the Chairman of the Azerbaijan National Statehood Party, and his friend Jeyhun Farzullayev were arrested under charges brought by citizen Eldar Rzayev. A criminal case has been brought against him under Article 221.3 of the Criminal Code (hooliganism committed with a weapon). He was then sentenced to 2 months of pre-trial detention. the dispute stemmed from sale of a car to the citizen by Panahli.

Panahli’s supporters claim that the real reason behind his arrest is his journalistic activity. He wrote a number of articles criticizing the government, published in various press outlets.

HEARING ON YOUTH ACTIVIST’S APPEAL STARTS WITHOUT HIS PRESENCE