Another Youth Activist of NIDA Sentenced to 10-Day Administrative Arrest 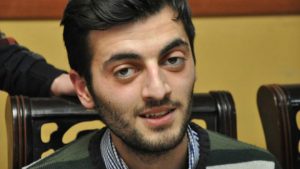 Anar Abdulla, another member of the opposition NIDA Civic Movement, was detained and taken to Narimanov district police office #18, as Institute for Reporters’ Freedom and Safety (IRFS) was reported by NIDA Movement.
Willing to defend the youth activist’s right, lawyer Shahla Humbatova went to meet with him at police office #18, but was told that Anar Abdulla was not there, although the lawyer saw the youth activist at the police office.
Anar Abdulla was then taken to Narimanov District Court, where he was found guilty under Article 310 (resistance to police) of Administrative Offences Code and was sentenced to 10-day administrative arrest. During the hearing, Narimanov District Court judge Rashad Abdulov refused to accept lawyer Shahla Humbatova’s attorney warrant to defend Anar Abdulla’s rights, but despite of the lawyer’s insistence, information about the refusal was not recorded in the transcript of the court session.
According to Azerbaijani Constitution and the European Convention for the Protection of Human Rights and Fundamental Freedoms ratified by Azerbaijan, everyone has the right to counsel from the moment of arrest. However, both employees of Police Office #18 and Narimanov District Court arbitrarily violated Anar Abdulla’s right to counsel.

Note that NIDA Civic Movement members Giyas Ibrahimov and Bayram Mammadov were arrested on May 10, 2016. Both activists are charged were charged under Articles 234.4.1 (illegal manufacturing, purchase, storage, transportation, transfer or selling of narcotics, psychotropic substances or their precursors – on preliminary arrangement by a group of persons or by an organized group) and 234.4.3 (- in a large amount) of Criminal Code. Bayram Mammadov and Giyas Ibrahimov were ordered detained for 4 months by Khatai District Court’s decision of May 12, 2016.

Youth activist Giyas Ibrahimov had written “Happy Slave Holiday” and “fuck the system” on the late Azerbaijani president Heydar Aliyev’s statue facing the Central Bank near the 28-May metro station, and Bayram Mammadov had taken a photo of the slogans on the statue. The youths were subjected to torture during interrogation at the police office.

On May 25, NIDA activist Amid Suleymanov and photo reporter Elnur Mukhtar were detained. They were sentenced to 10-day arrest. It is supposed that Elnur Mukhtar, together with NIDA Civic Movement member Amid Suleymanov, recited the words “Happy Slave Holiday” written by youth activists Giyas Ibrahimov and Bayram Mammadov on the late Azerbaijani president Heydar Aliyev’s statue facing the Central Bank near the 28-May metro station on May 09, 2016. They were caught on the cameras in the area and were therefore detained.