APFP Activist to Remain in Prison 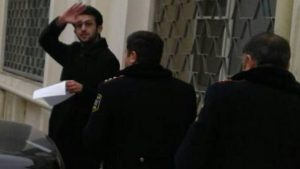 According to the lawyer, although Saturday was a non-working day for courts, the court hastily considered Nijat Nazimov’s case and made its decision.

The attorney noted that the appellate court denied the youth activist’s appeal against the imprisonment decision and upheld Surakhani District Court’s decision of 10 January 2017 sentencing Nizamov to 10-day administrative arrest.

Mustafayev said Nizamov himself also participated in the appeal hearing. He added that he would submit a complaint to the European Court of Human Rights upon receiving a copy of the court decision. “Based on past experience, we expected the original decision to be upheld. There was nothing unusual about it. Just the number of complaints submitted to the European Court increased by one,” the lawyer commented.

Background: Nijat Nizamov was taken from his apartment to the 30th police station of Surakhani District Police Department on 9 January. For a long time, his relatives and colleagues were kept in the dark about his detention. The youth activist was charged with disturbing public order and sentenced to 30-days of administrative imprisonment by Surakhani District Court.

Woman Jumps off the Third Floor at Lankaran Police Department