Woman Jumps off the Third Floor at Lankaran Police Department 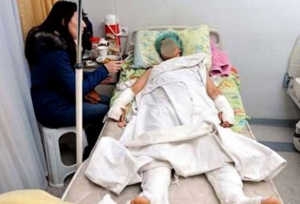 Yagut Aliyeva, an IDP from Fuzuli region and resident of Shuruk village of Lankaran region, jumped off the third floor of Lankaran Regional Police Department, the woman herself has said.

According to her, she had been subjected to horrific torture at the police department for refusing to admit to a crime she says she did not commit. She claims that she jumped fearing that they would sexually assault her. Aliyeva, who is currently receiving treatment at Republican Clinical Medical Centre No.1, is in critical condition.

Aliyeva says she was beaten up at the police department and forced to assume responsibility for a fatal incident that took place in her neighbourhood 4 years ago. According to her, she lent 900 AZN to her neighbours. When she asked for her money back, the sisters threatened her and warned that they would tell the police that Aliyeva burned their friend, Fakhriyya Huseynova to death in 2013. The woman noted that on the night of 28 December five plainclothes officers suddenly broke into her home and took her to the police department. “They kept me there overnight. The next day, they took me to the room of Alifaga Kazimov, the deputy chief of Lankaran Police Department. He told the policemen ‘go and connect her to electrical circuit’. They beat me with a baton right before the deputy police chief’s eyes. They were kicking me in the head, in the body and just anywhere they could. They beat me until I lost consciousness. They were telling me to admit to killing my neighbour Fakhriyya. They forced me into signing some paper,” Aliyeva said. According to the victim, after being beaten at the police department, she was taken to Lankaran Regional Prosecutor’s Office. At the prosecutor’s office, the woman spoke about her ordeal and said that the murder case had been forcefully imposed on her. Although she was released after her statement was taken at the prosecutor’s office, the police officers did not leave her alone. They grabbed her arms, pushed her into the car and brought her back to the department. Aliyeva was beaten even more severely this time and was demanded that she change her statement provided to the prosecutor’s office. She stated that Alifaga Kazimov himself also participated in the process of beating.

“This time, the deceased’s relatives were also there. They also beat me brutally. The deputy chief demanded me to apologise to the relatives of the deceased. I threw myself at their feet and begged for forgiveness. I am completely innocent. They were filming me with a phone camera while beating me up. Alifaga Kazimov kicked me and said ‘see what I am going to do to you tonight’. Then he told the policemen ‘take her downstairs and give her a good lesson’. I could not stand it anymore and asked for permission to go to the toilet. I was afraid that they could sexually assault me. Therefore, I jumped off the third floor through the bathroom window,” Aliyeva said.

The woman remained at Lankaran Regional Hospital for 3 days, before the police officers took her to Clinical Medical Centre No.1 in an ambulance. “My children are small, aged 6, 10, and 13. My husband has passed away. My mother came with my kids to see me and brought food. They were told that I had not jumped out of the window and that I would be released after providing a statement. They have been delaying my operation for many days. The hospital performs the surgery free-of-charge, but we need to buy a metal rod that costs about 1,800 AZN for my spine, which has been fragmented. Yesterday, Alifaga Kazimov’s assistant visited me. He told me ‘why did you jump feet first? You should have jumped headfirst and died’. He then offered my brother 1,500 AZN for the metal rod, but on the condition that we drop the issue, we will cover up the rest ourselves’,” the woman said.

Yagut Aliyeva told me she knew Fakhriyya Huseynova who died in 2013. According to her, the woman fell on an electric stove and died, and she had nothing to do with her neighbour’s death. “Seeing as I did not admit to the false charges, they are trying to blame my other neighbour Elgun Hashimov as well, alleging that we strangled Huseynova together. They are now keeping Elgun in administrative detention, allegedly due to resisting arrest,” the victim noted.

APFP Activist to Remain in Prison