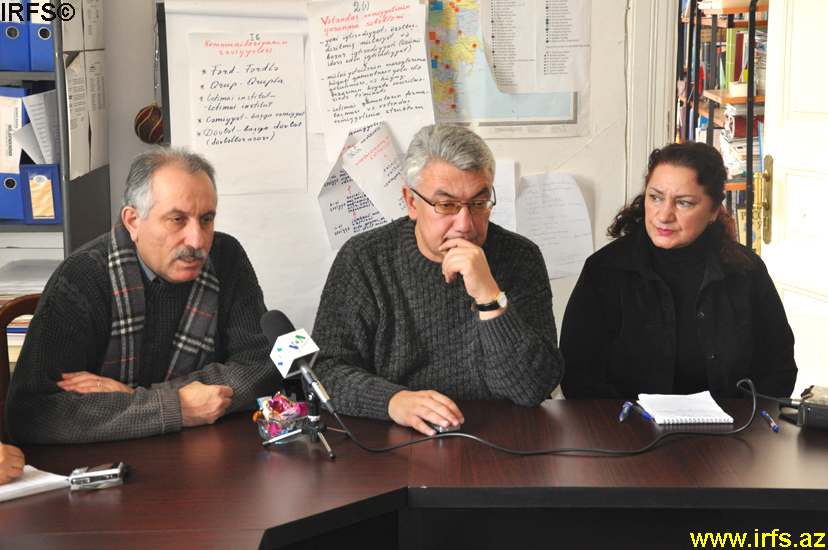 Today, 4 January, a meeting was held regarding Gundelik Azerbaijan and Realniy Azerbaijan Newspapers’ Editor-in-chief Eynulla Fatullayev. Azerbaijan’s civil society representatives adopted an appeal addressed to local and international communities during the meeting.
It is said in the appeal that finding heroin on Eynulla Fatullayev is new provocation against the journalist who was waiting for the decision of the European Court of Human Rights in the near future and who investigated the murder of Monitor magazine editor-in-chief Elmar Huseynov’s murder in 2005. This provocation creates risks for new sentence against Fatullayev and for his life.
It is emphasized in the appeal that extra concrete work should be done in addition to the statements that local and international communities gave during the spurious arrest of Fatullayev, other journalists, and bloggers. President Ilham Aliyev stands behind these persecutions. Democratic governments and institutions are asked to implement their duties. And the following suggestions were adopted by means of the appeal:
•    To take steps making it difficult and/or impossible for high-ranking officials of Azerbaijan who has responsibility for these repressions to visit democratic countries for private purposes;
•    The Council of Europe should prepare urgent effective mechanisms to demand for the implementation of its resolutions regarding democratic issues;
•    To announce 2010 international solidarity year with Azerbaijani democratic forces.
Furthermore, structuring the Speech Freedom Defense Committee, sending statement regarding the issue to the European Court of Human Rights on behalf of Azerbaijan’s civil society and organizing the meeting of lawyers and other steps were discussed during the meeting.
On 29 December, 0.22 grams heroin was found on Fatullayev. Eynulla Fatullayev and his lawyer assessed this incident as an operation set-up to prevent the decision of the ECHR regarding the journalist in the near future. Fatullayev was transferred to the Baku Investigative Prison on 2 January.
Eynulla Fatullayev was sentenced to 2.5 years of imprisonment on 21 April 2007 for insulting honor and dignity.  Later he was convicted under articles 214.1 (threatening terror), 283.2.2 (incitement of ethnic/national, social or religious hatred abusing authority), and 213.2.2 (tax evasion) of the Criminal Code and was sentenced to 8.5 years of imprisonment on 30 October 2007.
Realniy Azerbaijan has been published as weekly newspaper, and Gundelik Azerbaijan was published as a daily newspaper since 2005. Eynulla Fatullayev established the newspapers and was the editor-in-chief of both publications. The newspapers ceased their work after the arrest of the editor-in-chief in 2007.
Previous Post