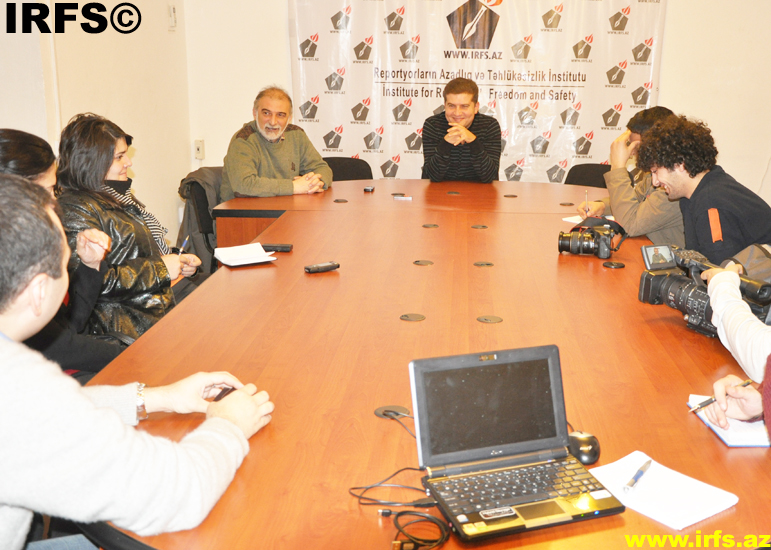 Today, 21 November, in the press centre of the Institute for Reporters’ Freedom and Safety (IRFS), the Right Defense Committee for Youth held a press conference regarding the arrest of Emin Milli and Adnan Hajizade.
RDCY member Erkin Gadirli said that lawyers Isakhan Ashurov and Elton Guliyev were not present in the conference because they were in prison visiting the bloggers. E.Gadirli added that an appeal was filed against the verdict of the Sabail District Court and that they will take the case to the European Court of Human Rights in the end.
According to E.Gadirli, the parents appealed to the judge to visit Adnan Hajizade and Emin Milli.
Adnan’s father Hikmet Hajizade said that he believes the court verdict is unfounded because the parties’ right to equality was strictly violated in the Sabail District Court. He noted that the Appeal Court should adopt a fair decision, fulfill the appeal and free the young bloggers so that Azerbaijan’s image is not damaged.
On 8 July, at approximately 8:00 p.m., Emin Milli and Adnan Hajizade were sitting at a table in “Lebonese” (Livan) restaurant along with several other young adults, when two people that looked like sportsmen came up to them, and attacked them causing physical injuries. Although they appealed to police as victims, police detained Adnan and Emin as suspected persons for 48 hours and freed the attackers. On 10 July, the Sabail District Court issued a decision under article 221.2.1 (hooliganism) of the Criminal Code to sentence Emin Milli and Adnan Hajizade to two months pre-trial detention. On July 20 the Appellate Court upheld the decision of the lower court. The investigation of the criminal case was concluded and a criminal case under articles 221.2.1 (hooliganism) and 127 (inflicting intentional minor bodily harm) was opened against E.Millli and A.Hajizade and the case had been sent to court to be considered. According to the verdict of Sebail district Court, Emin Milli was sentenced to 2,5 years imprisonment and Adnan Hajizade to 2 years imprisonment on 11 November.