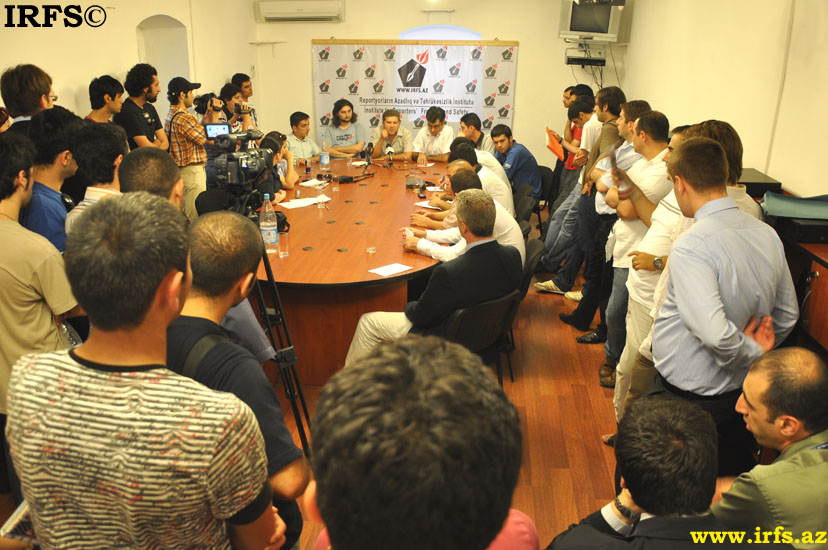 Today, 13 July, in the Press Center of the Institute for Reporters’ Freedom and Safety, the Coordination Group for Defense Committee that was established in connection with the arrest of “Alumni Network” Youth Organization Coordinator, ANTV Online TV Leader Emin Milli and one of “OL” Youth Organization’s coordinators, well-known video-blogger Adnan Hajizade conducted a press conference.
Coordination Group Coordinator, “Election Monitoring and Democracy Education Center” Chairman Anar Mammadli told the journalists that this kind of meetings will be held every week until the youth activists are released and public will be informed about the work done.
Independent lawyer Erkin Gadirli spoke and said that Emin Milli and Adnan hajizade’s arrest is unfounded.

“They were subjected to physical pressure, sustained injuries and appealed to police as injured party, but were detained for 48 hours as accused party,” said Gadirli. “Two days later they were sentenced to a pre-trial detention during a court trial that had serious law violations. To begin a hearing after 8:00 p.m. (after work hours are over at 6:00 p.m.) and issuing the harshest decision to arrest them is against law.” E.Gadirli added that tomorrow an appeal will be filed against the decision of the Sabail District Court. Stating that they do not believe the Appellate Court will adopt a fair decision, Gadirli emphasized that they will appeal to the European Court of human rights since the Appellate Court is the last instance for an appeal regarding pre-trial decision.
Then other young adults, who were in the restaurants with Emin Milli and Adnan Hajizade, spoke. The friends said that it is Adnan Hajizade’s birthday today and that they sent food and congratulation cake to prison; however, they don’t know whether the present has already reached them.
Coordination Group and “Dalga” Youth Movement Member Ramin Hajili talked about plans in connection with this issue and noted that they consider holding protest actions.

“We will be giving information to mass media about these actions not before but after we carry them out.”

On 8 July, at approximately 8:00 p.m., “Alumni Network” Youth Organization Coordinator, ANTV Online TV Leader Emin Milli and one of “OL” Youth Organization’s coordinators, well-known video-blogger Adnan Hajizade were sitting at a table in “Lebonese” (Livan) restaurant along with several other young adults, discussing the activity of youth organizations related to the internet, when two people that looked like sportsmen came up to them, insulted them, and demanded that they stop talking about politics. Then they attacked Emin and Adnan, causing physical injuries. Although they appealed to police as victims, police detained Adnan and Emin as suspected persons for 48 hours and freed the attackers. On 10 July, Sabail District Court Judge Rauf Ahmadov issued a decision to sentence Emin Milli and Adnan Hajizade to two months pre-trial detention .

“P.S.NOTA” TO OPERATE IN PLACE OF “NOTA” NEWSPAPER