APPEAL MADE TO MILLI MEJLIS TO ADOPT LAW “ON DEFAMATION” 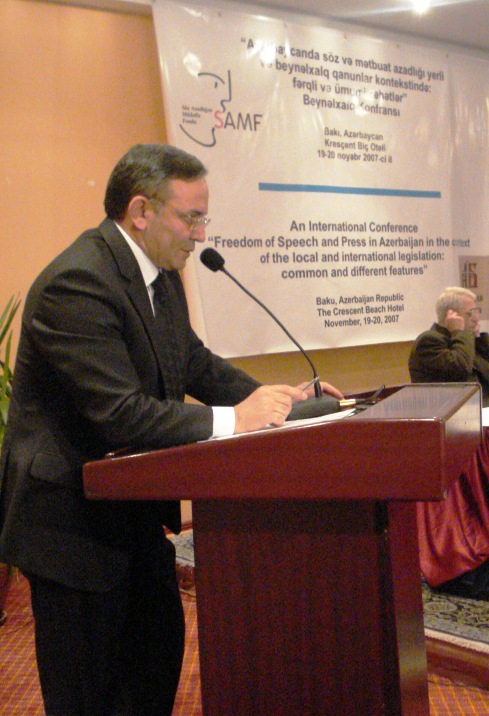 Press Council Chairman Aflatun Amashov has appealed to Milli Mejlis Speaker Ogtay Asadov to put the draft law “On Defamation” up for discussion in Mill Mejlis (parliament). The Institute for Reporters’ Freedom and Safety was told this by A. Amashov.
“International organizations have been stating that the adoption of this law in Azerbaijan is necessary,” said Amashov. “We want the draft to be discussed during the next session of the Milli Mejlis. Articles 147 (libel) and 148 (insult), which envisage criminal responsibility for defamation, should be removed from the Criminal Code.”
“Media Rights Institute” intends to conduct a roundtable in the near future to discuss the topic of making changes to the legislation on defamation. According to Media Rights Institute Program Coordinator Khalid Agaliyev, they have addressed an appeal to Milli Mejlis deputies. The deputies have also been given a draft law “On Freedom of Speech” prepared by the Media Rights Institute Expert Group.
“There’s a greater need for adoption of the law ‘On Freedom of Speech’. Defamation is one of the important components of the freedom of speech. It is possible to consider this draft a compromise because it does not consider to annul the articles 147 (libel) and 148 (insult) envisage oversee criminal responsibility for defamation from the Criminal Code. We recommending changing these articles. According to the Draft Law, article 323 (damaging the honor and dignity of the head of Azerbaijan’s government) of the Criminal Code should be abolished and the parts of articles 147, 148 and 324 (offensive actions against Azerbaijan Republic’s State Flag and State Emblem) envisaging imprisonment should be removed from CC. However, in the draft law it is proposed that the restricted freedom, public work and fines remain as punishments.
Previous Post

HEARING AGAINST “NOTA” NEWSPAPER TO CONTINUE IN NIZAMI DISTRICT COURT