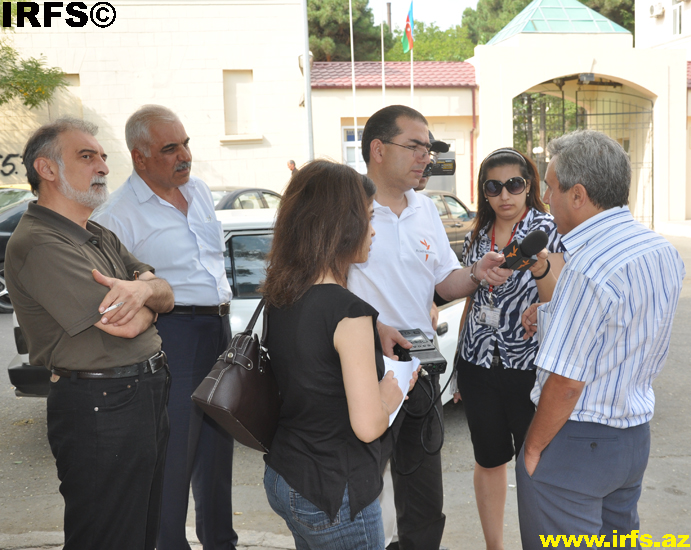 Today, 28 August, in the Baku Appellate Court, under the Chairmanship of Judge Gail Mammadov, a hearing was held on the appeal against the decision of the Sabail District Court adopted on 28 July 2009 on the lawsuit of lawyers Isakhan Ashurov and Elton Guliyev in connection with “Alumni Network” Youth Organization Representative Emin Milli (Abdullayev) and one of “OL” Youth Organization Coordinators, well-known video-blogger Adnan Hajizade for being subjected to bad behavior in the Sabail district police department and violation of their rights to defense.
The hearing was held closed and lawyers gave information about it after the hearing. Saying that Judge G.Mammadov upheld the decision of the Sabail District Court, the lawyers emphasized that they will appeal to the European Court of human rights.
On 8 July, at approximately 8:00 p.m., Emin Milli and Adnan Hajizade were sitting at a table in “Lebonese” (Livan) restaurant along with several other young adults, when two people that looked like sportsmen came up to them, and attacked them causing physical injuries. Although they appealed to police as victims, police detained Adnan and Emin as suspected persons for 48 hours and freed the attackers. On 10 July, Sabail District Court Judge Rauf Ahmadov issued a decision under article 221.2.1 (hooliganism) of the Criminal Code to sentence Emin Milli and Adnan Hajizade to two months pre-trial detention. On July 20 the Appellate Court upheld the decision of the lower court. Investigation of the criminal case was concluded and sent to court on 27 august.