APPEALS OF EMIN MILLI AND ADNAN HAJIZADE NOT FULFILLED 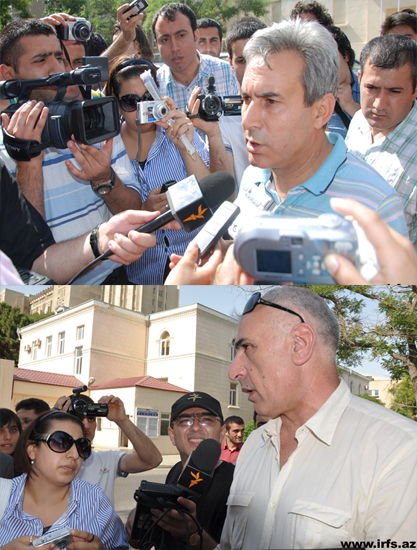 Today, 20 July, in the Baku Appellate Court, hearings were held on the appeals against Sabail District Court’s decision to sentence “Alumni Network” Youth Organization Coordinator, ANTV Online TV Leader Emin Milli and one of “OL” Youth Organization’s coordinators, well-known video-blogger Adnan Hajizade to pre-trial detention.
During both hearings the defense lawyers put forth a motion to change the judges. They objected to the court composition because the hearings were held closed. The motions were rejected after deliberation.

According to Lawyer Isakhan Ashurov, an analogous decision was adopted on Adnan Hajizade’s appeal. “Judge Jamal Ramazanov did not fulfill the appeal to annul the decision to sentence Hajizade to pre-trial detention.”
The lawyers said that they will file a cassation complaint against the decisions of the Appellate Court.
Representatives from embassies, international organizations, civil society and journalists were not allowed in the hearing because the hearings were held closed.