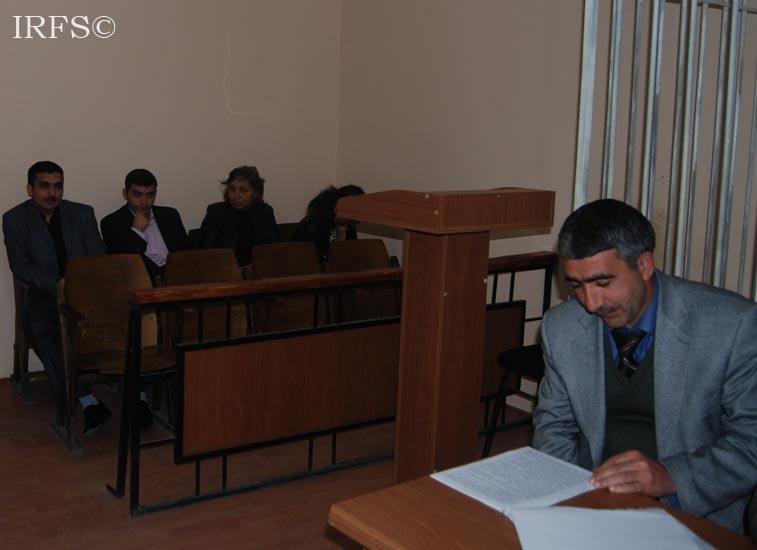 Today (Saturday, March 29) in the Baku Appellate Court, under the chairmanship of Judge Sahibkhan Mirzayev, a hearing was conducted on the complaint put forth by “Bizim Yol” newspaper correspondent Mushfig Huseynov.

Khasayev told the court, “M. Huseynov was convicted under Criminal Code article 311.1 (taking a bribe). In that article it is directly stated, ‘from a ranking person.’ The statement ‘a ranking person’ implies someone carrying out a specific job or someone with a special rank. However he (ed. Mushfig) was working as a private businessman and has his own Tax Payer Identification Number. There was no contract between the newspaper’s chief editor Baheddin Haziyev and him. In addition to this, when the victim appealed to the Ministry of National Security on 18 June, he said that the money was for the newspaper’s source of compromising information about him and his family, so this would not be published.  Later it says the money was given for safety. And at the end of the trial, he said it was not for articles with comprising information, but for the non-publication of critical articles. Also M. Huseynov himself and his two infant children suffer from illnesses. Taking all of this into consideration, I request that the verdict handed down by the Grave Crimes Court be declared unfounded and annulled.”

R. Musayev said that he agreed completely with his colleague.

Then Mushfig Huseynov spoke. He said, “I have a stenogram of my conversation with R. Aliyev.  In this stenogram it can be clearly seen that R .Aliyev offers me money six times; the first time it is to prevent the publication of articles, the second time not to write critical articles, and the other four times to learn the name of the source of information. After I took the money he provoked me to count it. After this we talked for a few minutes. And I returned the money. The only reason I took the money was to give it to the person providing me information to prevent the publication of articles about Aliyev’s family. That person would then give the money to the actual source of the information.

After this, the victim’s representatives spoke. I. Abbasov said, “I believe the verdict is correct. Regarding the video footage, it was not montaged. I ask the court to uphold the verdict. P. Hajiyev expressed his agreement with Abbasov.

State Plaintiff Rahil Ismayilov said that M. Huseynov’s appeal was unfounded, and asked the court not to fulfill it.

Regarding a petition put forth during the preparatory hearing by the Institute for Reporters’ Freedom and Safety to photograph and film the hearing, the judge announced that this petition would not be fulfilled.

Recall that on 21 January 2008 the Grave Crime court sentenced Mushfig Huseynov to six years of imprisonment, and an additional two years during which he is forbidden from working as a journalist.