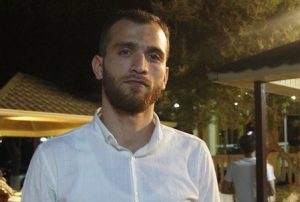 Huseynaga Huseynov, brother of Muslim Union Movement deputy chairman Abbas Huseynov who is one of the defendants in ‘Nardaran case’, has been detained, as reported by Abbas Huseynov’s lawyer Fariz Namazli.

According to Namazli, Huseynaga Huseynov was detained by armed persons at 9.30 pm on October 5, and was taken to an unknown destination.

Huseynov’s relatives appealed to the police to learn about his whereabouts and heard that Huseynaga had been taken to the Main Organised Crime Department (MOCD) of the Ministry of Internal Affairs.

However, the reasons for his detention have not been disclosed to his relatives.

Abbas Huseynov’s other brother Malik Huseynov was also detained on October 6, according to lawyer Fariz Namazli. Malik is also believed to have been taken to the MOCD.

After several hours, they have been released.

Abbas Huseynov, a defendant in ‘Nardaran case’, has recently made some highly critical speeches during hearings held in Baku Grave Crimes Court, which has already led to his removal from the courtroom twice. It is assumed that Huseynaga Huseynov has been detained specifically to silence Abbas Huseynov.

Background: Muslim Union Movement’s Chairman Taleh Bagirzade and several other members of the Movement are charged under 21 articles of the Criminal Code including homicide, terrorism and incitement to riot.

On 26 November 2015, an armed incident occurred between a group of believers and policemen in Nardaran settlement of Baku, during an operation conducted by the police. According to official reports, the shootout resulted in the death of six, including two police officers. Taleh Bagirzade, the leader of the Muslim Union Movement, and several believers were detained as part of the operation. A criminal case has been launched in relation to the incident by the Prosecutor General’s Office of Azerbaijan Republic.