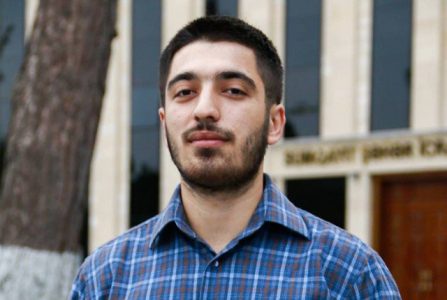 The health of Rahim Shaliyev, an activist of Sumgayit branch of REAL Movement, has gotten even worse, lawyer Yalchin Imanov reports.

According to the lawyer, an ambulance was called for Shaliyev at the temporary detention facility of Sumgayit City Police Department after his health declined. Shaliyev has developed a skull deformation, which Imanov believes is a result of the torture inflicted on his client in police custody when he was arrested on 20 February.

During a meeting with his lawyer on 22 February, Shaliyev informed his attorney that the authorities tortured him. “There, about five muscular men started to beat me up and insult me. I told them that I had a heart problem and head trauma on the left side of my head, and asked them to at least not hit me there. However, they began slapping me on the traumatised area even more and hitting my chest near my heart as well as my back, arms, legs and groyne. It really hurt, and I began screaming and tried to run out of the room. One of them grabbed my waist, lifted me up and knocked me on the floor. They tried to break my fingers. Four of the fingers in my right hand were severely injured,” Shaliyev recounted. The activist has also informed the employees of the Ombudsman’s Office, who visited him on 23 February, about the tortures.

On 25 February, lawyer Yalchin Imanov met with Rahim Shaliyev. “An ambulance was called, as he had an intense headache. The medical examination revealed a deformation in the left side of his head that had resulted from beatings. This distortion is apparently felt just by touched. Shaliyev said the first aid doctors had told him that they could not offer him sufficient medical aid and could only inject him with a painkiller. He refused the painkilling injection, saying that it was not an effective treatment,” the lawyer says. According to Imanov, Rahim Shaliyev has also developed a hearing problem, alongside with the headaches, and needs to undergo an urgent and strict medical examination.

Background: REAL member, blogger Rahim Shaliyev was detained on 20 February. Under Sumgayit City Court’s decision, he was sentenced to 30-day administrative imprisonment on charges of disobeying a police officer.