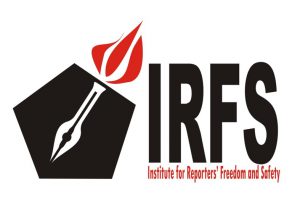 The Institute for Reporters’ Freedom and Safety (IRFS) is gravely concerned and alarmed by the suppression of the freedom of expression in Azerbaijan. The restrictions on free speech, imprisoning and arresting journalists, bloggers and social media activists under various pretences, and the intensification of cases of harassment, torture, and violence against them are also distressing.

IRFS strongly condemns the crackdown on free speech and regards the penalties against social media activists as a government attempt to subdue the freedom of speech in a more hostile manner.

One of the recent examples of a violation of the freedom of expression is the summoning and interrogation of the staff of Azadliq, an opposition newspaper highly critical of the Azerbaijani authorities, by the Serious Crimes Investigation Department. Over the past week, ten employees and correspondents of the paper have been interrogated. The staff and journalists of Azadliq newspaper, which has ceased publication since September 2016, are still under pressure. Azadliq has stopped publication because of a financial crisis coupled with political pressures and deliberate court decisions against them. Dozens of journalists, needing their jobs to support their families, are in an uncertain waiting period. It should be noted that Azadliq newspaper’s distribution director Faig Amirli and reporter Seymur Hazi are currently in jail.

There is a justified concern over the threat to the life of Emin Milli, the head of the Germany-based online media outlet Meydan TV that enjoys widespread popularity in Azerbaijan. Milli says he is aware of a group of thugs dispatched to Germany to assault him and has informed the law enforcement agencies of this issue. The international travel bans imposed on several journalists (Aynur Elgunash, Natig Javadli and Sevinj Vagifgizi), who were once cooperating with Meydan TV and Radio Liberty’s Baku bureau, are still in effect. This is an act of prevention of the journalists’ activities by the authorities. National television channels that made a sensation out of blogger Alexander Lapshin’s extradition to Azerbaijan do not report on the crackdown on freedom of speech. Denying the television channels, which are moderated and controlled by the Presidential Administration, of independent decision-making and chances to pursue an independent broadcasting policy is another example of the violation of the freedom of expression. IRFS is against all cases of this kind.

IRFS declares that in February alone there has been an unprecedented increase in the number of cases of harassment and arrests serving to restrict freedom of speech. The arrest of several members of the Azerbaijan Popular Front Party, REAL party, D18, and clergymen, as well as the growing pressure on lawyers undertaking political cases, must be immediately stopped. The Azerbaijani government must abide by the requirements concerning protecting freedom of expression, human rights and fundamental freedoms laid out by the international organisations and conventions which are signed and agreed to by the country.

Journalist Elchin Ismayilli’s arrest on allegations of extorting money, harassment of Netherlands-based blogger Ordukhan Teymurkhan’s family members and the 30-day arrest of his brother and nephew who are unrelated to politics and social activism, and REAL Movement Sumgayit branch member Rahim Shaliyev’s detention and brutal torturing in the police office that caused problems to his health including a skull deformation represent a loss of the right to a healthy life and suggest that one core governs the administration’s repressive machinery. Instead of launching a criminal case into blogger Mehman Huseynov’s abduction, arrest and subjection to violence and torture, the court accuses the youth himself of defaming the police. A criminal case has been initiated against Mehman Huseynov in Surakhani District Court based on the complaint of Nasimi District Police Department chief Musa Musayev. At its first hearing, the court banned Mehman Huseynov’s departure from the country, though he already lacked an identity card and they had already taken his passport five years ago. The judge, who is the author of this ridiculous decision, verified Mehman’s identity based on a photo. It is an absurdity that this fact is a manifestation of the Azerbaijani judiciary’s pitiful dependence on the authorities rather than laws.

IRFS underlines that, although the majority of those arrested lately have been charged under Article 535.1 (deliberate disobedience to a lawful demand of a police officer or serviceman) of the Administrative Offences Code, most of them have in fact been punished for their speeches on social networking websites and in the press. In so doing, the government of Azerbaijan seeks to instil fear in those who stand out in the socio-political sector and lead society, thereby discouraging them from their struggle. The individuals, who demonstrate intolerance to critical and free opinions, are in fact widening the gap between the government and the people and seek to discredit the political establishment once and forever by all means.

IRFS notes that one of the newly emerged and widespread forms of pressures on the freedom of expression is detaining activists, taking them to police departments and forcing them to delete their critical Facebook posts. Classical Popular Front Party’s Yasamal branch chair Nisakhanim Valiyeva has recently been held in police custody for four hours and released only after deleting her posts and a ‘preventive conversation’ with her. The political activist’s detention coincided with the day Azerbaijan’s first lady Mehriban Aliyeva was appointed the country’s first vice-president.

Turkish television channel FOX’s broadcast on Azerbaijan’s local cable TV services was suspended – in violation of citizens’ consumer rights, access to information and international standards – after a critical commentary on Mehriban Aliyeva’s appointment as first vice-president contrary to the principles of democratic governance under the Azerbaijani President’s recent decree that has become a target of criticism from the international community. IRFS is disappointed by such developments and regards them as a malicious step taken by the government towards a monarchy. These forms of pressure lead to the elimination of republican values.

IRFS views the steps taken towards regulation of the internet and control of the online media and the proposals made for the tightening of laws as the suppression of democracy and the elimination of the freedom of expression and the principles of pluralism. One of the sources of concern is the fact that the MP, who has submitted the proposal for the regulation of the internet to Milli Meclis (Parliament), is the chairman of the Press Council Aflatun Amashov. The MP, who is supposed to work for the independence of the press and the protection of journalists’ rights, calls for the introduction of restrictions on the online media, its regulation based on principles serving unknown purposes, and its registration controlled by upper circles.

IRFS calls on the authorities to refrain from any form of violence against freedom of expression and to release the activists framed and arrested on trumped-up charges.

IRFS urges the government, which already exercises control over the traditional media including television, radio and newspapers, to stop pressure on free online space and to abandon its efforts aimed at taking control of the internet.

IRFS further calls on the Azerbaijani courts to refuse to make unlawful decisions based on orders from the authorities.

IRFS believes that the path to Azerbaijan’s democratic development is through the independence of the media, which is the fourth branch of government.