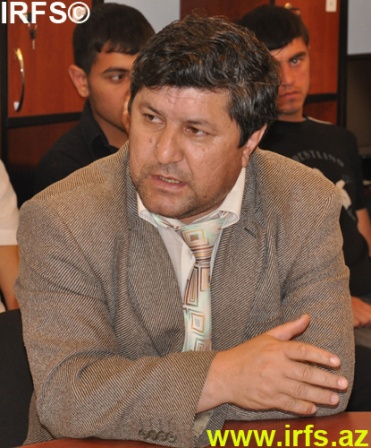 The trial of the Khural newspaper chief editor Avaz Zeynalli was reopened at the Baku garve Crimes Court on December 5th. Judge Ramella Allahverdiyeva presided over the hearing.
The public prosecutor asked Zeynalli some questions about the witnesses in his case. The prosecutor wanted to know what Zeynalli thought about the witnesses’ claims that the chief editor had blackmailed them and demanded money. Annoyed by the questions, Zeynalli had a quarrel with the prosecutor, which made the judge to pause the proceedings.

Zeynalli denied extorting the witnesses, saying that they were pressured to give false testimonies. He quoted witness Aydin Heydarov as saying that he was forced to provide the testimony.
The trial was postponed until December 12th, 2:00pm.
Khural chief editor Avaz Zeynalli faces charges under Articles 311.3.3 (taking large bribe) and 311.3.4 (extortion) of the Criminal Code, which he denies. It is widely believed that Zeynalli was arrested for his professional activities.