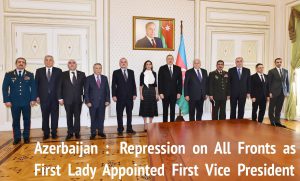 The relentlessly brutal political repression has reached a point of no return after at least eight prominent activists have been thrown behind bars in the weeks leading up to the controversial appointment of the First Lady of Azerbaijan to the newly created position of First Vice President, the Institute for Reporters’ Freedom and Safety (IRFS) said today.

The organisation condemns the Azerbaijani regime for aggressively restricting the rights to freedom of expression, association, and assembly, cracking down on dissidents and anyone considered a threat to the ruling regime.

This crackdown has preceded the illegal consolidation of power in the hands of the ruling regime on 21 February when President Aliyev announced that his wife, Mehriban, would become the First Vice President of Azerbaijan.

The ruling family, the Aliyevs, have held onto power in Azerbaijan for the past two decades through a combination of fraudulent elections, silencing dissenters and tightening the laws.

The appointment has become possible due to a recent change to the Azerbaijani Constitution. On 26 September 2016, Azerbaijan held a controversial referendum on constitutional amendments that strengthened the grip on power of President Ilham Aliyev and his family. IRFS considers the vote as fraudulent as all 29 of the controversial amendments were passed by 90-95% of the voters. This is highly unlikely to get 90-95% of a population to agree on anything let alone 29 unwarranted constitutional amendments.

One of the amendments that passed through the fraudulent referendum was a new Article 103-1, which allows for the creation of the position of First Vice-President and other Vice- President positions of Azerbaijan, appointed and dismissed solely by the President. Presidential powers would fall to the first vice president in the event that the president becomes incapable of discharging his duties — rather than to the prime minister, who needs to be approved by parliament.

The constitutional amendment was in stark contradiction to European standards as clearly stated in the Venice Commission Opinion No. 864 / 201. This recommends time to have the constitutional amendment approved by parliament and a conscientious debate in the public sphere. The rapid push to hold the referendum by the regime did not allow for parliamentary approval or for a proper public debate.  The Venice Commission found institutional changes such as extension of presidential term, expanding presidential powers and establishment of Vice President mandate as being “incompatible with democratic standards”. The Commission was “particularly worried by the introduction of the figure of unelected Vice-Presidents, who may at some moment govern the country”.

In 2005, Azerbaijan ratified the United Nations Convention Against Corruption, thereby undertaking the obligation to “ take measures to ensure public services are subject to safeguards that promote transparency, efficiency and merit-based recruitment”. By appointing his wife as the next in line of presidential succession, President Aliyev acted in blatant disregard to Article 7 of the Convention, which requires states to recruit non-elected officials on principles that “promote transparency and prevent conflicts of interest”.

Furthermore, Aliyeva’s appointment is a gross violation of the Law on Civil Service of Azerbaijan Republic, which stipulates, in article 27.2.3, that close relatives may not be directly subordinate to one another within the Civil Service. It should not be overlooked that almost the exact same wording is used in article 7.1 of the Law of The Republic of Azerbaijan On Combating Corruption.

The day after the nepotistic VP appointment the Minister of Internal Affairs, Ramil Usubov, appoints his son Emil to a high ranking position. The reforms that Azerbaijani authorities promised to their lenders and international partners appear to be focused on nepotism not combating corruption.

IRFS states with dismay that Azerbaijan has become increasingly stifled to the extent that it is no longer possible for civil society to report and prevent cases like these. Azerbaijan has anti-NGO laws, which are among the worst in the world, comparable to those in Egypt, Ethiopia, Russia and Zimbabwe. These laws effectively prevent activists from scrutinising the government’s human rights record, and promoting transparency, good governance and accountability.

Leading up to the Vice President (VP) appointment the regime had intensified their repression of civil society activists and independent journalists.

IRFS chairman and popular blogger Mehman Huseynov was arrested and tortured due to his activism. Two youth activists were given harsh sentences for writing political slogans on a statue of the former president Heydar Aliyev, the father of the incumbent president. Several others have been detained for short time specifically to prevent them from protesting the VP appointment. On the same day as the VP announcement Rahim Shaliev, a blogger and member of the Real party was arrested for 30 days and a new report from his lawyer says he was tortured directly because of his political activity. The leading opposition daily, Azadliq has been fined and harassed by the government recently to prevent them from speaking out against the recent actions. Regional Chairman of the Classic Popular Front Party of Azerbaijan (CPFPA), Nisakhanum Veliyeva, was detained for over four hours because of her criticism of First Lady Mehriban Aliyeva on Facebook.

In addition to repression of critical voices inside the Azerbaijan, dissidents and critics outside the country have been victims of attacks and threats. On 16 February, prominent activist and director of independent  media outlet in exile, Meydan TV,  Emin Milli reported to the Berlin authorities about a plot to attack him from the Azerbaijani regime. Specifically, he stated that “Azerbaijan’s special services have dispatched a group of sportsmen (ed: thugs)  to Germany (ed: where he lives in exile) to assault” him.  His police report comes just weeks after a speech in the European Parliament that received 300,000 views. IRFS calls on governments of host countries to ensure protection of Azerbaijani activists  who may have well-founded fears for their security in exile, and to carry out thorough investigations into threats against Aliyev regime’s critics on their territory, in order to bring those responsible to justice.

IRFS resolutely denounces these abuses of fundamental rights, including the official block by the Aliyev administration of the Turkish affiliate of Fox TV. The broadcasting officially stopped in Azerbaijan in the evening on 22 February. The entire channel has become inaccessible in all formats, digital, analogue, and IPTV broadcasting. The entire reason for the block is based on a two-minute clip that playfully discusses the Vice President appointment. The TV provider Aile TV said this was an instruction from the National TV and Radio Council. The harsh and swift reaction of the administration will deprive millions of Azerbaijani citizens of the independent international news that they need to make economic and life changing decisions. This will not only hurt the people of Azerbaijan but also cut the funding for this outlet that is one of a few surviving in their repressive regime.

These abuses stand in fundamental contradiction to the human rights principles enshrined in the European Convention on Human Rights and they seriously call into question Azerbaijan’s membership in the Council of Europe.

To this end, IRFS calls on the Azerbaijani government to end the deeply entrenched patterns of human rights violations and political repression. The organisation calls on the international partners of Azerbaijan to exert serious political pressure on the authorities until they fulfill the human rights and democracy commitments.

Furthermore, IRFS calls on the international lenders – the Asian Infrastructure Investment Bank, Asian Development Bank, European Investment Bank, European Bank for Reconstruction and Development and World Bank — to publicly condemn political repression in Azerbaijan and to review policy towards Azerbaijan in light of its deteriorating human rights and democracy record. In addition, IRFS calls on the Extractive Industries Transparency Initiative (EITI) to suspend Azerbaijan immediately for continuous failure to comply with the EITI standard. 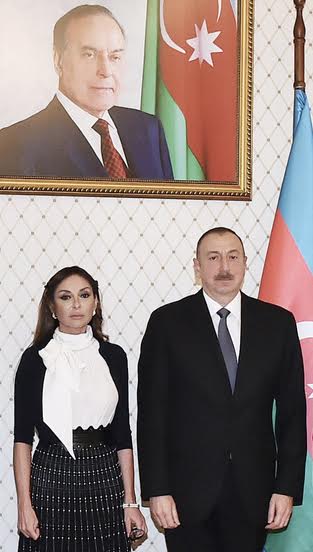