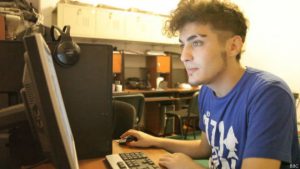 On 6 March, IRFS Chairman, blogger Mehman Huseynov’s mother went to the Detention Centre #3 of the Penitentiary Service located in Shuvalan settlement of Baku to meet with her son but was denied a meeting, lawyer Elchin Sadigov has reported.
Mehman’s mother was told that she had to present a letter from the court. “Detention centre employees’ behaviour is illegal. According to the Law on Ensuring the Rights and Freedoms of Detained Persons, in the absence of a decision by the prosecuting authority on imposing restrictions, a detained person is eligible to one meeting with his relatives per week in all circumstances,” the lawyer noted.

After 24 international organisations made a statement criticising the Azerbaijani authorities due to recent violations of the freedom of speech and expression in the country and blogger and IRFS Chairman Mehman Huseynov’s arrest, the advisor to the Azerbaijani President on Socio-Political Issues, Ali Hasanov, commented on the issue.
Hasanov noted that Huseynov’s arrest was in accordance with the law and his act constituted a crime. In the presidential advisor’s opinion, it is unacceptable to politicise Huseynov’s arrest and attribute it to his professional activity thereby calling the court decision into question. “Azerbaijan is a state based on rule of law, where courts are independent. And, it is impossible to influence their decisions by means of political campaigns or pressure,” Hasanov noted.

“Famous blogger Mehman Huseynov’s arrest shows that even a country like Azerbaijan has gone further downhill,” writes Giorgi Gogia, South Caucasus Director of Human Rights Watch.
As stated in the article, the authorities retaliated against Mehman Huseynov for not stopping his activity, complaining about the police, and doing a vox pop related to Azerbaijani President’s wife Mehriban Aliyeva’s appointment as the First Vice-President.
The author reminds that Mehman Huseynov joins dozens of journalists, bloggers and activists arrested for their political activities in Azerbaijan, and calls on the government to release Huseynov and to punish the police officers who have resorted to torture.

OSCE Representative on the Freedom of the Media Dunja Mijatovic and Head of the Office for Democratic Institutions and Human Rights (ODIHR) Georg Link have also condemned the judgment on IRFS Chairman, blogger Mehman Huseynov, and urged Baku to immediately release him.
“I am calling on the authorities to free Mehman Huseynov. I hope that the Court of Appeal will review this decision,” Mijatovic said.
Head of ODIHR Georg Link noted that any complaint of inhuman treatment or torture had to be investigated without delay, and from that perspective, the court decision on Mehman Huseynov’s case gave rise to concerns.
The Committee to Protect Civil Society has also issued a statement demanding that blogger Mehman Huseynov is released, his case be thoroughly investigated, and those who abducted him on 9 January and subjected him to physical and mental suffering be punished.
Note that, an appeal was filed against Mehman Huseynov’s sentencing on 6 March.

Background: Mehman Huseynov was detained in the evening hours on 9 January. He was released after being convicted and fined AZN 200 under Article 535.1 (disobedience to a lawful requirement of the police) of the Administrative Violations Code. Following the hearing, Huseynov told journalists that he was harassed for his professional activities and had been tortured by the police officers.
Following this interview, the Ministry of Internal Affairs filed a petition with the Prosecutor General’s Office, noting that Mehman Huseynov had made baseless allegations in his press statements such as his abduction by the police, illegal restriction of his freedom, and his subjection to torture including physical pain and mental suffering, in order to deceive the public and to undermine the reputation of the police.
“The Ministry of Internal Affairs has filed a petition with the Prosecutor General’s Office of the country to give a legal assessment of Mehman Huseynov’s act of slandering the police by accusing them of a serious crime. Additional information on the results of the investigation will be published,” the Ministry’s statement read.
Mehman Huseynov says he has undergone a medical examination in connection with his harassment and injuries sustained. “We filed a complaint with Baku City Prosecutor’s Office due to the tortures inflicted on me, but the prosecutor’s office declined to launch a criminal case in this connection,” Huseynov added.
Mehman Huseynov is the editor of the popular critical Facebook page Sancaq and the chairman of the Institute for Reporters’ Freedom and Safety.
Mehman Huseynov, the founder and manager of the Facebook page Sancaq (https://www.facebook.com/Sancaq.biz/?fref=nf) having 323,000 followers, has recently been producing videos on senior officials’ and parliamentarians’ expensive properties. He has also been making videos on important socio-political processes taking place in the country. Huseynov’s latest video was a street poll on first lady Mehriban Aliyeva’s appointment as first vice president by President Ilham Aliyev. The question he asked the respondents was ‘would you give your wife a post if you were in charge’.