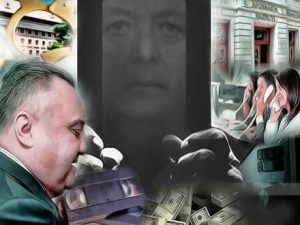 > Witness accused the victim of installing a camera in the lift and watching women;

> Businessman’s complaint against his business partner filed with the Ministry of National Security (MNS) has boomeranged back on him;

> Arrested General Subahir Gurbanov and other MNS officers testified at the hearing.

As the journalists were not granted access to the courtroom, the media representatives were informed of the hearing by the lawyers.

According to Akif Chovdarov’s lawyer Kamandar Nasibov, witnesses testified at the hearing about the fact that Techmarine LLC founder, Arif Hasanov was a victim. Hasanov’s business partner Sahrab Allahverdiyev testified as a witness.

As stated in the indictment, Arif Hasanov first filed a complaint with the MNS against his business partner. However, his complaint filed with MNS Colonel Fizuli Aliyev cost him dearly, in that he himself, his son and Sahrab Allahverdiyev were taken to the MNS and demanded to pay a fee of AZN 400,000.

Questioned in court, Sahrab Allahverdiyev said he had suffered damage by the MNS. During his testimony, Allahverdiyev also complained of his business partner’s and his son’s actions.

Lawyer Kamandar Nasibov quoted Sahrab Allahverdiyev as saying that the defendants had not put pressure on him. “The complaint against me had been made by Arif Hasanov, the founder of Techmarine LLC – the company I was working for. He alleged that I was a member of ISIS. He and his son stole oil from ships and replaced it with water. He installed a camera in the lift and watched women. Even, Arif Hasanov’s son raped one of the women. I was summoned to the Ministry after his complaint. But, I did not face any pressure,” the witness said.

According to Allahverdiyev’s investigation statement, arriving in the MNS, he was told by Fizuli Aliyev that Arif Hasanov had filed a complaint against him, but he rejected the accusations. He was then confronted with his former business partner Arif Hasanov. During the confrontation, the parties accused each other. Sahrab Allahverdiyev noted that AZN 1,000,000 had been demanded from him in the MNS, and he had given AZN 500,000. status.

Subahir Gurbanov said he was unaware of the issue related to Techmarine LLC. “The grounds for implementation of operational measures with regard to the above company should have been mentioned in a briefing note. But I do not recall receiving such a briefing note,” Gurbanov said.

Fizuli Aliyev and Natig Aliyev also denied Arif Hasanov’s allegations during their testimonies. They said they had not obtained any money from victim Arif Hasanov.

The proceedings will continue on 13 March.

The Ministry of National Security was dissolved under a Presidential decree in December 2015, and was replaced by two new agencies, the State Security Service and the Foreign Security Service.