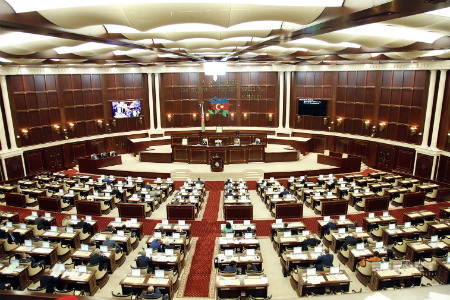 The additions have been proposed by Ali Huseynli, the chairman of the Legal Policy and State Building Committee of the Parliament.
The proposed article stipulates fines for individuals and legal entities for the online dissemination of banned information.

This provision will be applied in cases where this offence does not entail criminal responsibility pursuant to the relevant articles of the Criminal Code.
The Law on Telecommunications, the Law on Mass Media and the Law on Television and Radio Broadcasting should also be amended in line with the additions proposed to the Administrative Violations Code.
The Culture Committee has recommended the bill for the plenary session.

In March of this year, the Azerbaijani Parliament made amendments to the Law on Information, Informatisation and Protection of Information. These amendments prohibit the spread of certain categories information, which include propagation of terrorism, calls for terrorism, and information on methods and means of carrying out terrorist acts. Similarly, it is prohibited to disseminate information that propagates violence, religious extremism or ethnic, racial or religious hatred or hostility and explicit calls for violation of territorial integrity, violent coup and organisation of mass riots. Information on state secrets and methods of preparation and use of weapons and drugs, as well as pornographic materials are also included in the list of prohibited information.
In accordance with the above changes, the relevant executive power body (the Ministry of Transport, Communications and Information Technologies) has been delegated powers.

Rights Abuses in Azerbaijan: No End in Sight