AZERBAIJANIS’ RIGHTS TO FREEDOM OF EXPRESSION VIOLATED IN IRAN 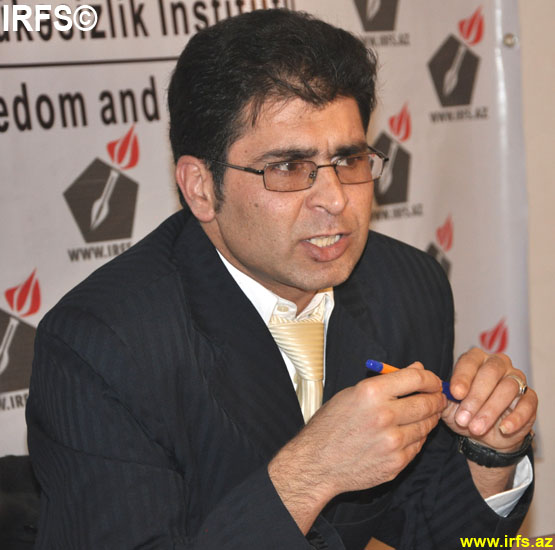 Today, 22 February, in the press centre of Institute for Reporters’ Freedom and Safety (IRFS), South Azerbaijan National Revival Movement Baku Bureau Head Agri Garadagli held a roundtable in accordance with the International Native Language Day.
In his speech he touched upon the violation of the rights of 35 million people in Southern Azerbaijan, and said that Azerbaijanis are deprived of their right to be educated in their native language in Iran. A.Garadagli said that there is existing article in the Iranian Constitution regarding Azerbaijanis’ right to receive education in Azerbaijani language, but it is not implemented, and he considers this genocide against the language and culture of Azerbaijan. He said that the publication of newspapers and journals in Azerbaijani language is banned in Iran, and thus there is a political motive to distance Azerbaijanis from their native language.
Participants in the roundtable stated that the Iranian authority’s position against Azerbaijanis is contrary to international law.
Previous Post