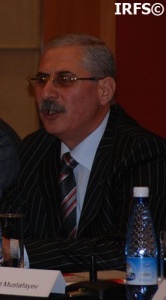 “In my opinion Azerbaijan’s press is free,” “Azerbayjan” Newspaper Chief Editor Bakhtiyar Sadigov said in an interview to “Azadlig” Newspaper.
Sadigov said that he does not agree with statement that have been released on the occasion of World Press Freedom Day which have noted Azerbaijan’s media with concern. “International organizations should learn the real situation in the country and then desseminate statements,” said Sadigov. “Come, got to a kiosk, buy a newspaper and read it. Everyone from the country’s president to the heads of department are criticized and no journalists are imprisoned as a result of this or punished.”
Previous Post

CHAIRMAN OF COMMITTEE AGAINST TORTURE PROVIDES NATIONAL SECURITY MINISTRY WITH INFORMATION ABOUT MURDER OF E. HUSEYNOV

CONTRADICTORY REPORTS ABOUT DISTRIBUTION OF “HURRIYYET” NEWSPAPER IN GANJA