Candlelight in the memory of Elmar Huseynov 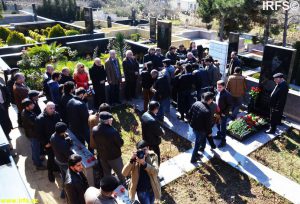 On March 2, Azerbaijani freedom of expression advocates paid tribute to the late editor of the Monitor magazine Elmar Huseynov, who was treacherously murdered eight years ago. “On the eve of the eighth anniversary of Huseynov’s death, the authorities made a traditional and futile statement that the criminals are being hunted. The Ministry of National Security spokesman said that the search for the criminals, launched 8 years ago, has not given any results. However, everyone knows that the Turkish team engaged in investigation of the journalist’s murder had found the names of the murderers and handed them to the Azerbaijani side,” said Elmar Huseynnov’s friend and director of the Ganun publishing house Shahbaz Khuduoglu.

Chairman of Musavat Party Isa Gambar accused President Ilham Aliyev and his entourage of the death of Huseynov.

“The death of Elmar Huseynov produced the opposite effect. He became a symbol of a torch lighting the way for free society in Azerbaijan,” said director of Turan Information Agency, Mehman Aliyev.

Chairman of the Institute for Reporters’ Freedom and Safety, Emin Huseynov, said the struggle would continue and murderers of the journalist would be punished sooner or later.

At 8 o’clock in the evening memorial candles were lit in front of the house, where Elmar Huseynov once lived.

The Institute for Reporters’ Freedom and Safety (IRFS) has submitted information inquiries to the press service of the Ministry of Interior, public relations department of the Ministry of National Security, press service of the General Prosecutor’s Office and National Bureau of Interpol, to learn what steps are taken to find the murderers. However all of these inquiries remain unanswered.

Background: Chief Editor of the Monitor magazine, Elmar Huseynov, was shot dead by unknown assailant in front of his house. The criminals shot him seven times. Soon after Azerbaijani authorities declared that the crime was committed by Teymuraz Aliyev and Tahir Khubanov, ethnic Azerbaijanis living in Georgia. However the Georgian government refused to deliver the a/m persons, saying that there is no evidence proving their guilt.