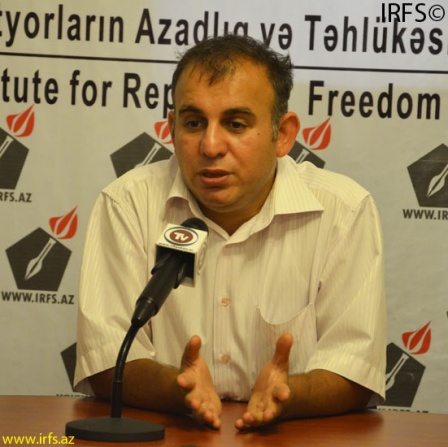 Today, Nasimi District Court held a hearing and decided not to grant the lawsuit filed by lawyer Khalid Bagirov against the Bar of Lawyers’ August 24th, 2011 decision to suspend his membership for one year.
At today’s hearing, the judge did not allow lawyers Asabali Mustafayev and Yalchin Imanov, or an OSCE representative who intended to observe the trial, to participate in the hearing because they arrived late. Khalid Bagirov defended his lawsuit against the Bar of Lawyers’ decision to suspend his membership solely based on a complaint filed by Rafig Abbasov, chief of Baku City General Police Office. He said that Abbasov’s appeal to the Bar had no legal basis and described the suspension of his activity for one year as unlawful.

The judge then refused to investigate new evidence which Bagirov presented to the court, causing Khalid Bagirov describe the court process as ridiculous and absurd.

The defendant’s representative, Altay Muradov, claimed that there is no legal basis for the Bagirov’s lawsuit and requested the court not to grant the appeal. Khalid Bagirov described the court’s refusal to allow his lawyers Yalchin Imanov and Asabali Mustafyev into the courtroom as unjust and condemned it as a violation of his right to defense.

After deliberation, the Judge  decided to not grant the lawsuit.

Background:
Baku City Police Office Chief, Rafig Abbasov, filed a lawsuit against Bizim Yol reporter Haji Zeynalov and lawyer Khalid Bagirov under Article 147.2 (libeling a person with a serious crime). Abbasov cited the March 1st, 2011 articles written by Haji Zeynalov, “Those arrested need a baton rather than a lawyer” and “Lawyer Khalid Bagirov offers to hold protests with this slogan,” as libelous. The second article claims that citizen Elvin Asgarov was beaten to death at police station #25 of the Nizami District Police Office. When the lawsuit was taken to court, the Yasamal District Court cited the plaintiff’s absence from the hearing without a sanctioned excuse, and the lack of a warrant of attorney on the part of the plaintiff’s attorney as grounds to reject the lawsuit. Despite the rejection of the lawsuit, the Bar of Lawyers’ Discipline Commission assessed the charges and decided to suspend Khalid Bagirov from practicing law for one year. Bagirov is a lawyer employed at legal consultancy office #6. This decision comes hot on the heels of an appeal launched by Baku City General Police Office Chief Rafig Abbasov.