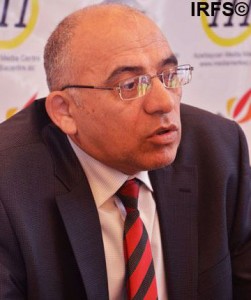 The Yasamal district court of Baku has issued a decision to freeze the bank account of opposition daily Azadliq, the newspaper’s acting chief editor Rahim Hajiyev told IRFS on October 25.

According to him, Azadliq’s accounts were frozen as the department responsible for implementing penalties at the court in the district of Yasamal set out to recover the fine, amounting to 32,000 manat, which was levied as a result of a complaint by businesswoman Kabira Mammadova, owner of the “Araz-Avia”, a.k.a “Bina” shopping center.

“We owe more than 20,000 manat to the publishing company due to the press distributor Gasid’s failure to pay its huge debt to us for the sold papers. Freezing our bank account in such a situation is nothing but an attempt to curtail the newspaper’s activity” said Hajiyev.

Background: According to 22 October 2012 decision of Yasamal district court, Azadliq and its employee Ramin Deko have jointly to pay a 32,000 manat fine to Kabira Mammadova in a defamation case.