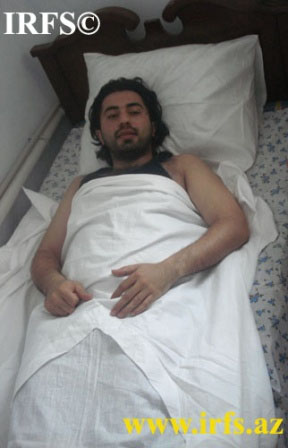 An article entitled “It’s proven that Emin Huseynov is working with missionaries” was run in today’s edition of “Ses” Newspaper.

In the article it is alleged that on 14 June Institute for Reporters’ Freedom and Safety Chairman Emin Huseynov “forged relationships with European religious sects and expressed opinions about the importance of Che Guevera propaganda.”

According to the text, “E. Huseynov suggested establishing ties with the PKK if needed. However, Krishna Dodi Kramnikin didn’t like the idea of connecting ties with PKK. D. Kramnik accused E. Huseynov of turning his back on the principles accepted by the group for 3 or 5 manats.”

Referring to injuries that Huseynov reported that he sustained at the hands of police, the article says, “This is a very ridiculous and illogical approach, because it doesn’t look convincing that the police would touch a regular citizen in Azerbaijan which is now a free, democratic and legal government. That is why there is no doubt that bad behavior stands behind this clamor of the opposition press.”

In the text, IRFS is referred to as a “bogus” organization.

E. Huseynov told IRFS, “I believe this is writing of a very unprofessional journalist or the article was written on a political order. To me it seems more like the realization of a political order.” According to Huseynov, the fact that “Ses” Newspaper did not learn his position is evidence of this. “I will appeal to the newspaper about this, inquire why they did not learn my position, and thus violated journalistic ethics. The information that has been written about me is a lie, and I assess claims that I have ties to sects as slander against me.  I will seek to get the newspaper to publish a refutation voluntary or have the article’s author I. Aliyev publish a refutation on the basis of a court order.”

* “Ses” Newspaper is introduced as an organ of the “Alinja” Azerbaijan Charitable Society, however the paper’s banner contains ruling Yeni Azerbayjan Party’s logo. Ses is a daily newspaper with a circulation of 4,800.

(This newspaper article in its entirety is presented at the end of this press release.)