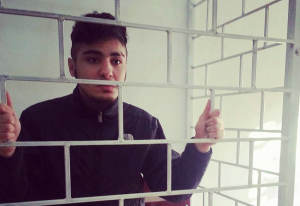 > None of the motions was granted by the court;

> Addressing the judge, Mehman Huseynov said: It would be good if you release me, but I would not care if you do not.

On 29 March, Baku Court of Appeal held a preliminary hearing on the appeal filed against Surakhani District Court’s judgment on blogger Mehman Huseynov. The hearing presided over by Judge Vagif Mursagulov was attended by a number of media representatives, socio-political figures, and representatives of international organisations and diplomatic corps. Due to the small size of the courtroom, many of those wishing to participate had to wait outside.

Mehman Huseynov’s presence in the hearing as ensured. His rights were defended by lawyers Elchin Sadigov, Fuad Agayev and Shahla Humbatova. Lawyer Alirza Habilov participated as the representative of the party that has brought the private prosecution.

Lawyer Elchin Sadigov filed motions to allow media representatives to take photos, to film the hearing, and to use audio equipment. He argued that Article 127 (independence of judges, main principles and conditions of implementation of justice) of the Constitution provided for this. The lawyer stressed that according to the Criminal Procedure Code, allowing photo and video recording is within the judge’s powers.

Lawyer Fuad Agayev supported his colleague’s motion. He reminded the president’s decree on the electronic court system that has been around for several years now. “According to this decree, it is possible to watch court hearings live through video recording. Because of the small size of the courtroom, many people are waiting outside and cannot watch the proceedings. Considering the domestic and international interest, in this case, I believe that it is high time to put a live broadcast of court proceedings into practice,” the lawyer said.

Lawyer Shahla Humbatova also noted that it was necessary to let media representatives conduct video recording and photographing due to the case being in public spotlight.

Alirza Habilov, the representative of the private prosecution party, left it up to the court’s discretion to decide whether to allow photo and video recording but added that this case was not ‘an issue of great public importance’ contrary to the lawyers’ claims.

After an on-the-bench deliberation, the court denied the motion.

Another motion lodged by the lawyers concerned Mehman Huseynov’s removal from the enclosed glass dock and being seated next to his lawyers. Lawyer Elchin Sadigov called this important for the better organisation of defence. “With him being inside the enclosed glass dock, it is only possible to communicate with him via a microphone, which is a breach of confidentiality,” the lawyer said.

Lawyer Shahla Humbatova said keeping Mehman Huseynov inside the glass dock was a violation of the presumption of innocence given the absence of a final court judgment on him. She emphasised that this principle had been established in judgments of the European Court of Human Rights.

The private prosecution party’s representative left the motion up to the court’s discretion. This motion was also rejected after an on-the-bench deliberation.

In another motion, Elchin Sadigov requested that Mehman Huseynov’s judgment is revoked, the case is returned to the preliminary hearing of the court of the first instance, and a special ruling is issued against Jeyhun Gadimov, the judge of Surakhani District Court who had rendered the verdict, due to procedural violations. Sadigov said the judge had unlawfully denied their motion concerning court competence at the preliminary hearing. “Mehman Huseynov’s speech considered libel was made in front of Nasimi District Court’s building, while the private prosecution party says they have appealed to Surakhani District Court based on Mehman Huseynov’s registered residence address allegedly because the media outlets that published the said speech did not have registration or address in Azerbaijan. However, this is about what Mehman has said during his public speech, not about his speech’s publication in the media. And, this public the was made in front of Nasimi District Court’s building. Therefore, they should’ve appealed to a court of the same district. Even the private prosecution party’s representative did not object to our motion regarding a change in court relevance. However, the judge denied our motion and issued the decision in haste,” the lawyer said.

The lawyer added that the decision of the preliminary court hearing of Surakhani District Court had not been presented to them yet. According to him, another procedural violation lies in the fact that Mehman Huseynov has not been served with the private prosecution statement either during the trial or to date in general.

The judge asked the lawyers to read on other motions, but lawyer Fuad Agayev said this motion excluded the filing of other motions. “This motion has to be granted. It is obvious that a procedural violation has been committed with regard to the issue of jurisdiction. Other motions will lose their importance once this motion is granted,” Agayev said.

Private prosecution party’s representative Alirza Habilov asked for the motion to be thrown out as groundless. The panel of judges denied the motion after an on-the-bench deliberation.

Lawyer Elchin Sadigov raised an objection to the judge. He pointed out that the panel could not discuss and decide that motion on the bench, but rather should’ve gone to the deliberation room. The lawyer considered this to be a procedural violation and asked for his objection to being recorded in the hearing transcript.

The lawyer also requested examination of additional witnesses. He quoted the Criminal Procedure Code as saying that the court cannot refuse to examine witnesses if their attendance is ensured by the defence. Regarding the importance of examination of witnesses, Sadigov said those persons were with Mehman Huseynov before his detention. “They will confirm that Mehman did not have any health problem until his detention by the police. If after his detention his health worsened to the extent making it necessary to call an ambulance, it means he was subjected to physical pressure by the police,” the lawyer noted.

He also requested that the deputy head of the criminal search section of Baku City Main Police Department, who had led the operation, be identified and invited to the court.

Another motion related to obtaining the protocols on administrative violation and detention and sending them for handwriting analysis. The lawyer wanted the handwriting experts to be asked whether the signatures on those documents belonged to Mehman Huseynov and if they did, whether he had signed them of his own free will.

Lawyer Fuad Agayev noted that if Mehman had been detained by officers of Post Patrol Service (PPS), then the opposite party had to present an extract from the dashboard camera of the PPS car. “Dashboard camera recordings show exact time. But there is no such footage because Mehman was detained by plainclothesmen in a car not belonging to the PPS. They even drove around the city for one hour discussing whether they should take him to the city police department or elsewhere. Therefore, if the recordings are obtained, it will become clear that Mehman was taken to Nasimi District Police Department long after his detention,” the lawyer noted.

Lawyer Shahla Humbatova said neither the court nor the prosecutor’s office investigating the torture reports had been interested in an objective investigation of the matter. “As Mehman rightly pointed out, they look for camera recordings and find a hundred proofs when one chicken is stolen. How come they failed to find a single recording in the city centre that is full of cameras when Mehman was detained,” Humbatova questioned.

The lawyers asked for the motions to be granted and did not object to the appeal the for the hearing. The defence asked the court to consider the appeal through partial judicial investigation.

Mehman Huseynov supported his lawyers’ motions. “My lawyers are right in what they are saying. As for what my opinion on changing the measure of pre-trial detention is, it would be good if you release me, but I would not care if you do not,” Huseynov said.

After a deliberation, the court announced the preliminary hearing decision denying all of the motions and deciding to consider the appeal without judicial investigation.