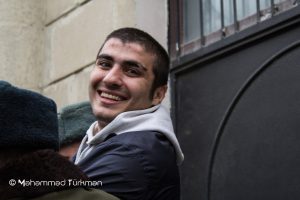 > The court did not give the defence time to get acquainted with the case materials;

> The judge made a hasty decision, without granting any of the motions;

> Lawyer Fuad Agayev believes that the hurried issuance of the decision is no coincidence.

On 28 March, Sabail District Court considered the appeal brought against the decision of Baku Prosecutor’s Office on refusal to initiate criminal proceedings into the police torture against IRFS Chairman, blogger Mehman Huseynov. The hearing was held behind closed doors and presided over by Judge Aytan Aliyeva. Mehman Huseynov himself participated in the hearing. His rights were defended by lawyers Elchin Sadigov, Fuad Agayev and Shahla Humbatova. Mehman Huseynov’s appeal was not granted.

The proceedings were resumed at 2 pm on 28 March. There was a break from 3.30 pm to 5 pm. The hearing continued after the break and finished at 6.15 pm.

Following the completion of the proceedings, lawyer Elchin Sadigov said despite being served with copies of the documents today, they were not given time to prepare. The court failed to conduct any investigation based on the appeal. None of the seven motions of the defence was granted. “The court conducted the hearing in a rush and denied our appeal. It simply announced the concluding part of the decision, without explaining why the appeal was not granted. The court tried to interrupt Mehman Huseynov when he was giving information on the tortures he had been subjected to and said it would not allow him to speak about that. However, Mehman gave his testimony on the torture,” Sadigov noted.

Lawyer Fuad Agayev said the materials of the prosecutor’s office decision on refusal to start a criminal case should’ve been presented to the defence the day before, but were not. “Yesterday we waited but were told the court that they had not received the material. I contacted the court at 9 am today, asking to come and familiarise ourselves [with the material] if it was available. The materials were received by the court at several minutes to 1 pm. And, we were served with them after the lunch, at almost 2 o’clock. We photocopied the 132-page material to analyse them with Mehman’s participation and to organise the defence tactics, i.e. to prepare relevant motions and applications, if needed. We told the court that we needed time for that and asked to defer the hearing until a different day. Unfortunately, the judge took an odd approach to this, even giving half an hour to Ms Shahla Humbatova, a lawyer who had newly joined the case, to familiarise herself with the case,” the lawyer remarked.

According to Fuad Agayev, seeing such an attitude by the judge, they handed in a written objection to her. “Our objection citing the above-mentioned reasons was not granted. Although the objection should’ve been considered by the chairperson of the court, the judge said the motion would be kept unexamined due to its lack of grounds. We reiterated that we had to get acquainted with the documents, conduct their comparative analysis, and learn Mehman’s opinion. Also, there are norms established by the European Court of Human Rights. Article 6 of the Convention is based on the principle of equality of arms. We should not be put at a disadvantage compared to the prosecuting party. In other words, we should have the opportunity to learn the information known to the prosecuting party to the same extent as them. Unfortunately, the judge came back after delaying us for an hour and a half and went to the deliberation room 10 minutes later without granting any of the motions. And after the deliberation, she announced that the appeal was not granted,” the lawyer added.

Fuad Agayev considers such an approach to be unacceptable. “The Judicial-Legal Council must react to such an attitude and behaviour towards the parties to the proceeding,” he said.

Fuad Agayev believes that the court’s hasty delivery of a decision is for a reason. “There will be a preliminary hearing on the appeal against Surakhani District Court’s judgment on Mehman Huseynov in Baku Court of Appeal at 4 pm tomorrow. We are going to test the appeal court’s attitude towards this case, as well. I do not rule it out that today’s hurry was related to tomorrow’s hearing because supervisory complaints can be appealed within 3 days. Apparently, they hurried so that we prepare and file an appeal quickly and they forward that appeal to the court of appeal so that the court decision on this appeal becomes final until the appellate court’s consideration of the appeal filed against the judgment. It is because the majority of the evidence referred to by Surakhani District Court stems from the prosecutor’s office decision on refusal to launch criminal proceedings,” Agayev stressed.

In lawyer Shahla Humbatova’s opinion, today’s hearing was nothing but a pretence of court proceedings. “They conducted a hearing simply for show as if they conducted an investigation. In reality, no investigation was carried out. Though I just joined the case today, they did not give me time to familiarise myself with the case. They gave us all only half an hour to familiarise with the case, make photocopies and organise defence. This is ridiculous. Mehman himself pointed it out that it was impossible for anyone, whoever they might be, to read 132 pages within half an hour, let alone analyse them afterwards and come up with defence tactics. Our motions to interrogate the witnesses, the experts and additional witnesses, to obtain video recordings, and so on were not granted. The court seemed to have no interest at all in investigating the matter,” the lawyer said.

After that, Nasimi District Police Department chief Musa Musayev filed a private prosecution with the court. The police chief asked the court to bring Mehman Huseynov to justice under Article 147.2 (libel, involving the accusation of a serious or particularly serious crime) of the Criminal Code.