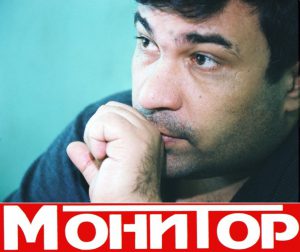 On the 13th anniversary of journalist Elmar Huseynov’s murder, IRFS urges Azerbaijan’s authorities to stop stalling and relaunch the investigation into his death.

On 2 March 2005, after receiving a number of death threats, Monitor magazine editor-in-chief Elmar Huseynov was gunned down in the stairwell of his apartment building in Baku, where he died on the scene.

Shot at the doorstep of his house on March 2, 2005, Elmar Huseynov was an ardent critic of Azerbaijani President Ilham Aliyev who the day after the murder of the journalist said that the perpetrators and masterminds of this crime will be brought before the law as soon as possible. Ironically and contrary to the presidential promise,already in the first months following this barbaric murder, the authorities of Azerbaijan did everything to obstruct the investigation. Invited by the authorities of Azerbaijan in the first days to assist in the investigation, Turkish and US law enforcement officers were mysteriously suspended a couple of months later from further investigative measures.

A serious and credible investigation of this case is long overdue–13 years later, the authorities have failed to adequately investigate this case and no one has been brought to justice for the attack. Over the past 13 years, the law enforcement agencies involved in the investigation have demonstrated deliberate negligence, effectively helping to conceal the truth behind the crime.

This suggests that influential members of the current government are in some way implicated in the journalist’s murder, and are not interested in solving the case. The authorities have failed to uphold their obligation to periodically inform the public on the results of the investigation.

This inadequate investigation into Elmar Huseynov’s murder, has prompted European Court of Human Rights (ECtHR) to award €20,000 to his widow Rushaniya Huseynova. The court ruled that the investigation into the murder had not been effective, adequate or prompt, having so far lasted more than 12 years (at the time of judgement). Furthermore, ECtHR identified a number of shortcomings in the investigation, namely: that the Azerbaijani authorities had not taken all the measures available to ensure that the two suspects identified, Georgian nationals, be prosecuted, such as transferring the criminal case to the Georgian authorities; that Huseynova had constantly been denied access to the case file by the authorities; and, that no adequate steps had been taken to explore whether Huseynov’s murder, apparently very carefully planned, could have been linked to his work as journalist, despite his strongly critical articles of both the Azerbaijani Government and the opposition.

“The most recent barbaric murders of investigative journalists Daphne Caruana Galicia in Malta and Jan Kuchak in Slovakia show that journalists from the EU member states become targets of corrupt government elites. Those murders could have been prevented if EU had demonstrated and implemented zero tolerance policy towards impunity in their neighborhood. Instead of shaking hands with Azerbaijan’s president whose political record includes unsolved attacks against critical journalists, including Elmar Huseynov’s murder and blackmail attack on female journalist Khadija Ismayilova, the EU leaders should have held the regime accountable”, IRFS Director Emin Huseynov said.

“ Until the Western democratic community seriously supports and stands in solidarity with journalists in authoritarian countries, Europe will continue to face new acts of violence against journalists”, Huseynov concluded.

Azerbaijani regime has failed to respond adequately to crimes against journalists, including murders, physical attacks, blackmail and threats, creating a climate of impunity that only encourages more severe violations of freedom of expression. Not a single case documented by IRFS since 2005, has been fully solved – with instigators and the vast majority of perpetrators remaining at large.

To this end, IRFS calls on the international community to exert pressure on the Azerbaijani authorities and demand a thorough and transparent investigation into deaths of Azerbaijani journalists Elmar Huseynov, Alim Kazymly, Novruzali Mamedov, Rafik Tagi and Rasim Aliyev.

Furthermore, IRFS calls on Azerbaijani authorities to detain and prosecute those responsible for the blackmail attempt and violation of privacy of outspoken female journalist Khadija Ismayilova in March 2012..

Press Briefing Ahead of Snap Elections, Azerbaijan’s Media Stifled by a Climate of Fear