CITIZEN GUNEL MAMMADOVA CLAIMS SHE WAS DISMISSED FROM WORK ILLEGALLY 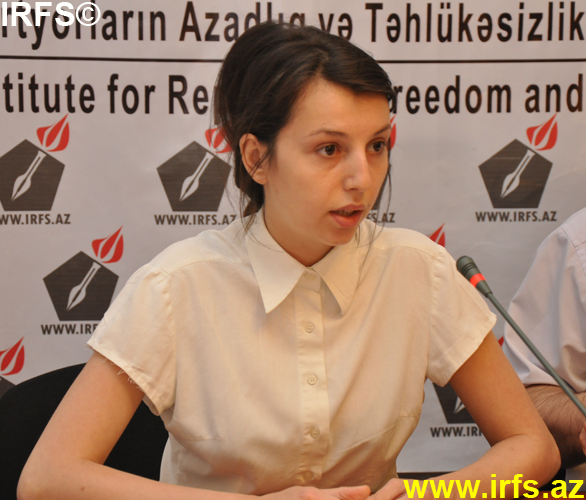 Today, 17 June, Gunel Mammadova and her lawyer Elman Osmanov conducted a press conference in the Press Center of the Institute for Reporters’ Freedom and Safety.
Gunel Mammadova told the journalists that she used to work as sales consultant at “Datasel” LTD – wireless communication services enterprise. On 12 December 2008 Datasel LTD Chief Director Ramiz Sharifov told Gunel that 1504 AZN was missing from the cashbox and blamed her.
“Using rude expressions, R.Sharifov told me to return the money and leave work,” said Guenl Mammadova. “I was in shock. I told him that I was unaware of the case and asked him to investigate the incident properly. However, the director did not want to change his mind and threatened me, saying he would send the case to police otherwise.”
G. Mammadova emphasized that she tried to prove she is innocent and in the end, she found out that another employee was responsible for the missing money. However, the company administration dismissed G. Mammadova forcefully without paying her salary.
G. Mammadova’s lawyer Elman Osmanov stated that in response to these injustices G. Mammadova has already filed a lawsuit against Datasel LTD in the Yasamal District Court. However, Judge R. Gurbanov, who is considering the case, rejected the lawsuit on the basis of false, unsubstantiated testimony. Emphasizing that the decision of the Yasamal District Court is unfounded, E. Osmanov said that the appeal filed against the decision of the Yasamal District Court will be considered in the Appellate Court on 19 June 2009.
Previous Post

GANIMAT ZAHID TO APPEAL TO COURT