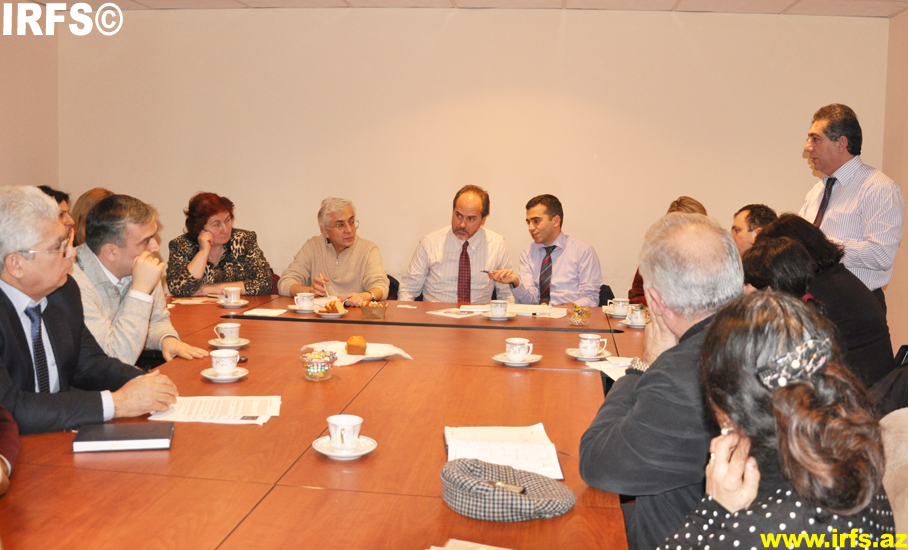 The Civil Society Defense Committee (CSDC) has restored its operation. The presidential decree regarding restrictive amendments and changes made to Law on NGOs that was signed on 25 December was discussed during today’s meeting of the committee.
Along with Ilgar Mammadov, Annagi Hajibeyli, Gubad Ibadoglu, Emin Huseynov, Zohrab Ismayil, Avaz Huseynov and other CSDC members, USAID Director on Azerbaijan Scott Taylor, the representative of the International Center on Non-commercial Rights, and the representative of the State Support Fund to NGOs Sahib Mammadov took part in the discussions.

CSDC members emphasized in their speeches that this decree is aimed at restricting the work of NGOs, and through this, the government is trying to create control mechanism over the civil society organizations. They stated that the decree contradicts the Constitution of Azerbaijan Republic and the European Convention. Therefore a decision was adopted to create a Working group within CSDC to investigate these issues and to work with relevant organs.

The participants touched upon the restrictive amendments and changes made to Law on NGOs on 30 June 2009. They said that both this law and the latest decree should be rescinded, and recommended that an appeal should be made to the Constitution Court.

The representative of the International Center on Non-commercial Rights said that the center is conducting a legal analysis into the decree in question and the results will be presented to the public in the near future.

USAID Director on Azerbaijan Scott Taylor stated that after this document is ready, a letter on behalf of the USAID will be addressed to the President of Azerbaijan and other relevant organs.

CSDC was established in May 2009 regarding the changes and amendments made to Law on NGOs and ceased its operation in November.

AZERBAIJAN RECOGNIZED AS NOT FREE COUNTRY