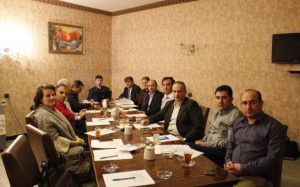 Civil Society Platform (CSP) has received a refusal from a press center to host their event, the Platform has said in a statement. CSP was founded by well-known civil society representatives, lawyers and journalists on February 10, 2016. The Platform has been set up with the purpose of putting the problems of the country’s current situation on the table of discussion, to hold detailed debates and to achieve tangible results.

In its statement, the Platform noted that the exercise of the right to freedom of assembly remains seriously problematic in Azerbaijan. Independent individuals and organizations not linked to the government have maximally limited opportunities to get together even in enclosed places in order to discuss current issues or to hold roundtables or conferences.

“Although the International Press Center (IPS) was an exception for the past 1-2 months, unfortunately, now they have also jumped on the bandwagon. On the occasion of the National Press Day (July 22), the Civil Society Platform decided to hold a roundtable in order to discuss the state of Azerbaijani media, and to this end, it applied to the IPS. IPS management said any event was impossible from the 9th through 31st of July, and refused to provide venue by saying that all dates had already been “reserved.” IPS has three conference rooms with a capacity to host conferences 24 hours a day. But it says that it is unable to spare one hour during 22 days. Such a behavior suggests that during 22 days (15 working days) IPS will host events for 360 hours. Given that IPS charges at least 100 AZN for an hour of the venue and that it hosts events for 360 hours, its income for 22 days will be 36,000 AZN. This facility, which by their own logic earns half a million manat per year, must pay at least 30,000 AZN in taxes annually. It is interesting how much tax this facility will pay in July,” the statement reads.

According to SCP members, considering IPS owners’ closeness to public officials, such a behavior looks like politically motivated, official parties’ intolerance to platforms of alternative thinking, and an attempt to prevent the exercise of fundamental rights and freedoms in the country.

Civil Society Platform strongly condemns such a discrimination against civil society groups, independent media and experts, and calls on officials to abandon such behavior and to respect rights and freedoms.