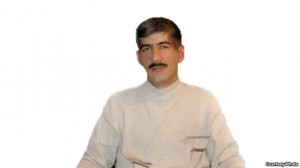 Azer Ali, correspondent of RFE/RL’s Azerbaijani Service (Radio Azadliq), was detained on May 10th while performing his job in Imishli city, Radio Azadliq correspondent Maarif Chingizoglu told the Institute for Reporters’ Freedom and Safety (IRFS). According to Chingizoglu, Azer Ali was detained while covering the protest by a group of Imishli residents in front of the local government building.

“Residents walked towards Executive Power to hold a protest against the seizure of their 85 ha grazing field by the residents of Thirty Two village. However they were stopped halfway by the police who beat and arrested some of the protesters, and our correspondent was filming this process. He was detained obviously for filming the police pressure on citizens” saidChingizoglu.

IRFS contacted Etibar Babayev, chief of Imishli District Police Department, to learn the details of the case. However the police chief hung up the phone as soon as he heard the question. Following our persistent calls, he answered the phone, but denied being Babayev and hung up again.

Owner of Qutb TV defrauded of his channel