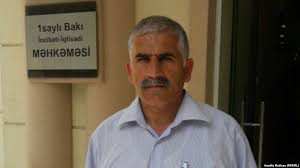 Baku Administrative Economic Court #1, chaired by Judge Elchin Mammadov, held a hearing on Alayif Hasanov’s lawsuit against Bar Association, requesting the annulment of the decision dated July 3, 2015 on his disbarment and termination of his lawyer activity. Bar Association Presidium made the decision to disbar Alayif Hasanov citing the court verdict on his conviction. The verdict in question was delivered based on the lawsuit of Nuriyya Huseynova, who had been human rights defender Leyla Yunus’ cellmate in Kurdakhani detention center. At the time, Alayif Hasanov was Leyla Yunus’ lawyer. In her messages to the public, which she passed on via her lawyer, Leyla Yunus stated that Nuriyya Huseynova, an ex-convict, was put in the same cell as her on purpose and that Nuriyya had beaten her. Nuriyya Huseynova sued the lawyer because of this, and Alayif Hasanov was convicted under Articles 147 and 148 (insult and libel) of Criminal Code. In November 2014, Alayif Hasanov was sentenced to 240 hours of community work. His sentence was later upheld by Court of Appeal and Supreme Court. On that ground, Bar Association disbarred Alayif Hasanov. However, Hasanov believes that the decision is politically motivated. He considers his disbarment to be part of the pressures against the lawyers, who defend the rights of political prisoners and are critical of the country’s judicial system.

Neither of the parties attended the court hearing. The presiding judge announced the decision, according to which Alayif Hasanov’s lawsuit was not granted.

Alayif Hasanov called the court’s decision completely unfounded and unlawful. The lawyer said the decision had been issued by order. “My disbarment was an old plot. By doing so, they try to scare away independent lawyers defending the rights of political prisoners. Therefore, they staged a show trial, slandered me and carried out their plan,” Hasanov said.