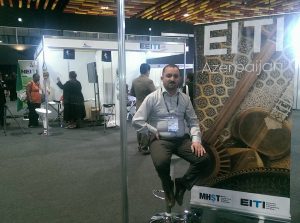 Center for Equal Opportunities Public Union chairman Rafig Tamrazov has been intimidated by unknown persons, Tamrazov told the Institute for Reporters’ Freedom and Safety (IRFS) in person. According to him, a person, who introduced himself as an employee of the Anti-Corruption Fund, accused him of taking bribe and blackmailed him.

The NGO chairman said he had appealed to law enforcement agencies of Azerbaijan Republic, including Prosecutor General’s Office, through the media about the unknown calls and threats. “In the recent one or two months, I have received phone calls from persons I do not know. They are telling me that I have allegedly taken bribe from someone and there is a complaint against me. I did not save the number of the first caller as I did not take it seriously, but the second and third calls were from the following numbers: (+994 50) 311 46 46 and (+994 55) 311 46 46. For the same reason, I did not record the exact date of the first call, but I received the second call on July 11, 2016, at 21.30. When I asked the caller to introduce himself, he said he was an employee of the Anti-Corruption … Although I asked the person, who called me repeatedly, which agency he represented, I could not get a clear response. Also, when I asked the person for some serious clarification, he cursed and insulted me. I got angry, but did not respond the same way,” Rafig Tahmazov said.

The NGO chairman said he was last called in the afternoon on July 14 and was threatened once again. “I received 10 calls from the same numbers between 15.43 and 17.40 yesterday. As the phone was in silent mode, I was able to answer only the last call. The caller, who openly introduced himself as a regional division head of the Anti-Corruption Fund, said he had forwarded the complaint to the police as I did not ‘show a normal attitude’ to his request. I regard it as extortion.

I should note that I consider this fact as a threat against myself and I am also wary of false witnesses. Therefore, I want these persons to be found and brought to justice. I should add that the Anti-Corruption Found is a non-governmental organization operating in Azerbaijan, and I don’t believe the callers are employees of the said organization,” the NGO leader said.