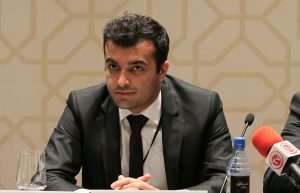 Baku Court of Appeal justified its decision with the argument that it was impossible to determine whether Rasul Jafarov was fully reformed as only little time had passed since his release.

Human rights defender Rasul Jafarov said although 7 months had passed since his release, his bank accounts were not unfrozen and he was subjected to inspections when leaving the country and coming back. Jafarov considers his remaining conviction as additional pressure against him.

Background: Rasul Jafarov was arrested in August 2014. He was convicted of tax evasion, illegal business activity, embezzlement, abuse of official powers and service forgery, and was sentenced to 6.5 years in prison by the verdict dated 16 April 2015 of Baku Grave Crimes Court. On 31 July 2015, Baku Court of Appeal dropped the tax evasion charge against Rasul Jafarov after he paid off his tax debt (8000 AZN) and reduced his jail term to 6 years and 3 months. Jafarov was released from prison under the presidential pardon decree of 17 March 2016.