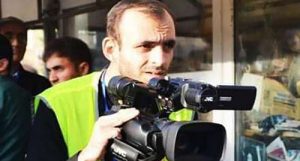 > The lawyers requested that the charges be decreased and two of the convicts be acquitted;

> A tension broke out at the hearing. The defendants’ aggression towards the judge and the prosecutor did not bypass the journalists, either.

On 26 April, Baku Court of Appeal held a hearing on the appeal against the judgment passed on the individuals convicted over the death of journalist Rasim Aliyev.

At the hearing chaired by Judge Gadim Babayev, Shamsaddin Guliyev, the lawyer of defendants Samir Mustafayev, Elshan Ismayilov, Jamal Mammadov and Arif Aliyev, made a defence speech. The lawyer noted that the lower court had violated the principle of fairness by handing his clients penalties inadequate to their offences and that Samir Mustafayev was not guilty at all in what had happened. The lawyer said the key factor in Rasim Aliyev’s death was medical malpractice and stressed that Baku Grave Crimes Court had failed to investigate this issue.

Guliyev claimed that the court had helped the prosecution by failing to investigate their unfounded accusations. Arguing that the trial had been marred by procedural violations, the lawyer noted that the investigation had not been conducted thoroughly and objectively. “Of course, the perpetrators must serve their punishment. And, whoever is not guilty must be acquitted. I believe that the charges levelled against my clients have been incorrectly classified under tougher [criminal law] provisions. Commission of a crime by Samir Mustafayev has not been proven at all by the investigative agency and the court alike. Maybe you might believe the indictment if the video footage of the incident scene and Rasim Aliyev’s video interview with journalists in the hospital did not exist. But those footages were not studied properly. Otherwise, it would have been clear who hit whom and who helped. Also, the fact that Samir ran after Rasim after picking up something from the ground proves that he did not intend to steal the thing he picked up,” the lawyer said.

The lawyer added that during the trial the court had simply questioned the witnesses, who recounted what had happened during the incident, rather than the witnesses whose interrogation was important for objective investigation of the case. “Because the video footages already show how everything happened. Moreover, the protocols about the video have also been written falsely. Despite the fact that the case file contained the statements of the majority of the witnesses – Rasim’s family members, friends, colleagues, police investigator, medical staff, radiographer, etc. – who were needed in order to reveal who was to blame for Rasim’s death, the court did not question them for some reason,” the lawyer remarked.

During the lawyer’s comments regarding the video footages, Samir Mustafayev intervened by saying ‘Were those who reviewed those footages stupid? Did they not see what had happened?’

Judge: Who you are speaking of?

Samir Mustafayev: Everyone who reviewed them but did not give a correct assessment…

Judge: Sit down, do not be lowered…

Samir Mustafayev: Why do you take it personally? I was referring to the investigator and those who reviewed them in Baku Grave Crimes Court…

The judge ordered that an act be drawn up about Samir Mustafayev for talking back every time he reproved him.

Continuing with his speech, lawyer Shamsaddin Guliyev noted that the X-ray image, which was one of the key evidence, had not been included in the case file. He said the investigator had, from the beginning, written that the death was caused by broken ribs and torn lungs and spleen, whereas the opinion about that had not been disclosed yet. “Was the investigator a fortune teller? How did he know that there would be such an opinion,” the lawyer asked and stressed that there were inconsistencies in the doctors’ statements and the X-ray image was deliberately concealed. He further noted that Rasim Aliyev’s statement was also missing in the case file. “Had the doctors been questioned, the true cause of the death would have been revealed,” he said. Guliyev added that those inconsistencies had not been investigated by the higher instance court because the appellate court had not considered the appeal through judicial investigation.

The lawyer requested that the charges filed be reclassified to less harsh ones and Samir Mustafayev be acquitted.

Taking the floor, Samir Mustafayev accused the courts of non-objectivity. “There is no rule of law in Azerbaijan or justice in Azerbaijani courts. If there were, we would not be here. You yourself know that I am innocent. I am leaving everything up to your conscience,” Mustafayev said.

The public prosecutor made a speech and asked for the appeal to be rejected. His speech was met by a strong objection from defendant Jamal Mammadov. “Be a man. You have clung to one fight and say we have killed a man…,” he said.

The court broke for deliberation. During the break, the defendants and their relatives demonstrated aggression towards the media representatives. They noted that the articles written by the journalists as Rasim Aliyev’s colleagues had also contributed to the issuance of severe sentences for the defendants. The journalists did not react seriously to their rudeness.

After the deliberation, the jury announced the decision on the rejection of the appeal.

Background: Journalist Rasim Aliyev died in City Clinical Hospital #1 on 8 August 2015, just hours after being battered by a group of people. The incident stemmed from the journalist’s criticism of footballer Javid Huseynov on his Facebook page.

Javid Huseynov’s cousin, Elshan Ismayilov called Rasim Aliyev and demanded that he post a retraction, leading to an argument between the two. As a result, with the intent to take revenge on Rasim Aliyev, Elshan Ismayilov formed a group consisting of his friends Jamal Mammadov, Arif Aliyev, Kanan Madatov and Samir Mustafayev, and met with Rasim Aliyev in front of Bayil Market in Bayil settlement at around 4 pm on 8 August 2015. They inflicted multiple serious bodily injuries to Rasim Aliyev by beating him with hand and foot causing damage to his internal organs and fled the scene. Despite being taken to Baku Clinical Medical Centre by ambulance, Rasim Aliyev died several hours later.

Based on the criminal case materials, Javid Huseynov was convicted of concealing a serious crime and sentenced to 4 years in jail by Sabail District Court’s judgment.

On 12 October 2016, Baku Appeal Court reduced Javid Huseynov’s sentence from 4 years to 1 year 2 months, and as the latter term had been served out, the footballer was released.