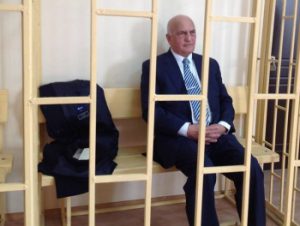 > The lawyers’ objection to the judge remained unconsidered;

> The prosecutor sought a prison sentence of 8 years and 9 days for Ali Insanov;

> The former minister called the charges trumped-up and fabricated. “I have had 107 court hearings in the past 11 years. This is the 108th. In none of these hearings the court ruled in my favour,” Insanov said.

On 26 April, Garadag District Court held a hearing on the criminal case of jailed former health minister Ali Insanov. At the hearing presided over by Judge Rashad Mustafayev, the public prosecutor made a speech and asked the court to sentence Ali Insanov to 8 years and 9 days in jail.

Ali Insanov’s lawyer Agaveyis Shahverdi said Ali Insanov had been held in prison for 10 years and 10 months despite not having committed any crime. “Ali Insanov has appealed to Garadag District Court to punish those who have concocted this false criminal case. But his motion has not been addressed. The court denied the defence motions in a biased manner and only investigated the prosecution evidence,” Agaveyis Shahverdi said, raising an objection to Rashad Mustafayev, the judge considering the case. His justification for the objection was the fact that the same judge extended Ali Insanov’s pre-trial detention term on 1 March, and in his decision on the extension, the judge violated the former minister’s presumption of innocence by writing that his offence had been proven before Insanov’s criminal case was even heard in court. “Therefore, he cannot consider this case and issue a fair decision,” the lawyer said.

Defendant’s other lawyer Togrul Babayev also defended the motion. The lawyer stated that Ali Insanov had not committed any crime. “Is it a right thing to seek an 8-year sentence for a non-existent crime? Who are you requesting a sentence for? For a man who has worked should-to-shoulder with Heydar Aliyev for 13 years? For an academician? For one of the founders of (the ruling party) YAP? Where was this victim treated for 35 days? Even the most seriously ill person gets well in a fortnight. They did not present any document in regard to all this. There were 56 days left until the date he (Ali Insanov) was supposed to go home. They held him in the most severe conditions. He has not met with his relatives for 11 years. He has always complied with the regime rules of the prison where he was held. Ali Insanov’s subjection to torture has been confirmed in the decision of the European Court. At the alleged time of the incident, there were 15 operatives in the prison. You mean Ali Insanov injured a person physically stronger than him in the presence of so many people? All of the people arrested together with Ali Insanov have been released,” the lawyer noted.

The court left the objection unexamined.

During his final speech, Ali Insanov said he was relaxed and optimistic. “I want to tell the public prosecutor to not worry. I am not going to bombard anyone with insults, because the things happening here and the requested sentence won’t drive me into hysteria. My upbringing does not allows this, either. How can you say these lies with such fervour? Terror against an academician is equivalent to terror against the whole people. Allegedly, I have stored medicines containing narcotic substances somewhere. Those, who had given the order for this lie, have lowered themselves to the level of the sergeant who has arranged this case. Look at what a state Azerbaijan is in. One orders, one plants, and one gives it a semblance of legality. The one lending it a semblance of legality also descends to the level of that sergeant. I do not think there will be someone who will believe this slander. All this is inexplicable fiction. In societies with even the least democracy, court hearings are broadcast live. However, in my hearings, journalists face restrictions,” the former minister said.

Ali Insanov then turned towards the prosecutor and said: “What part of your work will you talk to your relatives about with pride? Will you say that you planted drugs on a scientist, an academician and destroyed his life? Tell the people, who have instructed this person and sent him here, that they are not going to see Ali Insanov become a statue of sadness behind bars. Ali Insanov was born for the struggle. Do be aware that, Ali Insanov is the kind of a person who dances with death. Ali Insanov’s confinement in prison during both of the two presidential elections has been premeditated. In 2005, they framed me and illegally sentenced me to 11 years in jail. They continued the same pattern just shortly before the date I was supposed to be freed. You cannot destroy dreams. I set out on this path wearing a shroud. I have had 107 court hearings in the past 11 years. This is the 108th. In none of these hearings, the court ruled in my favour. This is an event that needs to be included in the Guinness book of records.

In the 118-man barrack where I have been staying, each person gets a place the size of a grave. They found nothing there. They should have at least called me when searching that warehouse-like room.

My right of defence was violated. When they called me, I refused to give a statement citing the absence of my lawyer. As I turned around to go, the chief called me. Anar Mammadov was also standing there with his pocket now already torn. How could I tear a protocol which had not been written? If the protocol was torn, why did they not take my fingerprints? Had there been an expert analysis, the investigative agency would have been exposed. How on

earth could I tear the protocol, tear Anar Mammadov’s shoulder strap and cause a craniocerebral injury to him all at once? As I refused to give statement there, they cuffed my arms and put me in solitary confinement. When I was being taken there, Anar Mammadov stood at the door laughing. If he had sustained a craniocerebral injury, why does not he have a CT image of his head? This is both ridiculous and weird. As for the medicines, this is entirely a put-up job. If they plant drugs on an academician in Azerbaijan, it means, it is also very easy to plant drugs on ministers, employees of influential international organisations and other people. You could not convince anyone in this way because these accusations do not fit in with me. Fear of public opinion is equal to fear of God.

I said everything I had to say. Please, issue a special ruling against these false victims and witnesses. Time will put everything in its place. Today, the prosecutor is smiling. Back then, Kamran Aliyev was also given a post. The prosecutor will be promoted, too. But the only thing that you will get, Mr Judge, is ‘thank you’. But that ‘thank you’ will carry a heavy burden.

I know a lot of things, which is what they are scared of. They think I will gather a couple of thousand people here. But, I do not even let my relatives come. Today, democratic revolutionary is approaching Azerbaijan’s borders. Unless the justice is restored, this fire will engulf the entire Azerbaijan. The situation in Azerbaijan has never been as grave as it is today,” Insanov said in conclusion.

After a deliberation, the judgment was announced. Former health minister Ali Insanov was sentenced to 7 years and 5 days in prison.

Background: Jailed since 2005, former health minister Ali Insanov faced new criminal charges in October 2016, which came just 58 days shy of the expiry of his jail term. According to the allegations, the former minister has been found in possession of a medication with psychotropic ingredients and has beaten a prison officer.

Ali Insanov was arrested on charges of a coup attempt on 19 October 2005. But later, he stood trial on charges related to economic offences and was sentenced to 11 years in jail. The complaint submitted to the European Court in connection with this case was granted in 2013. The decision took effect on 14 June 2013. The Plenum of the Supreme Court considered the European Court of Human Rights Court’s (EHRC) decision regarding Ali Insanov. According to the Plenum’s decision, the Appeal and Supreme Courts’ decisions on Ali Insanov were revoked, while the decision of the court of the first instance was not changed and Insanov was not released. The case was referred to Baku Court of Appeal for reconsideration, but the court upheld the judgment.